Getty Damian Lillard comes up the court against Frank Ntilikina.

The New York Knicks are stumbling after getting off to a hot start this season and lot of the issues surrounding the team involve the starting lineup.

So far this season, the Knicks’ starting lineup has left a lot to be desired, so much so that the stubborn Tom Thibodeau could be forced to make a change sooner or later.

Derrick Rose boasts one of the best +/- ratings in the league while Kemba Walker is featuring one of the worst, but it might be a lot more complicated than just switching the two in the lineup.

Rose has really settled into his role as a sixth man, so there might be another option available to the team and it once again involves Portland Trail Blazers superstar Damian Lillard.

In a Bleacher Report article about a trade target every NBA team should think about, the idea of the Knicks going after Lillard is floated. This is something that has been talked about on end for practically the whole offseason, and while Lillard has said he’s staying in Portland, all it takes is the right offer to pry away players in the NBA. 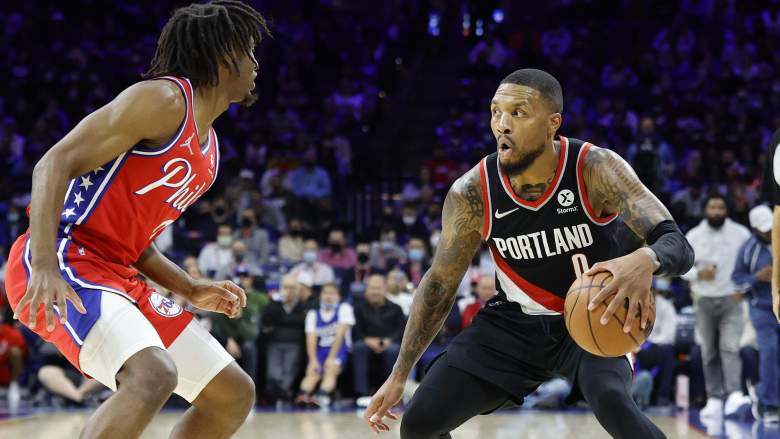 GettyDamian Lillard (right) guarded by Tyrese Maxey of the Sixers.

On paper, especially after the struggles, the Knicks landing a superstar point guard makes a ton of sense and it would certainly cement their spot in the Eastern Conference.

However, there could be some issues with the deal, most notable is that it’d likely include rising star RJ Barrett, a player who has taken yet another leap forward in his third season.

Superstar talent doesn’t come around often, so that might have to be the price the Knicks have to pay, but it’ll be enough to give them pause. Lillard and Randle is a good 1-2 punch to have, and then when you surround them with talent like Rose, Mitchell Robinson and Obi Toppin, you have a recipe for success.

It’s not clear what kind of offer would be enough to get Lillard, but even names like Toppin or Robinson could be included.

Do the Knicks Need to Make a Move?

It’s clear that what’s going on with the Knicks and their starting lineup right now isn’t working. There are some options the team could opt for from within, such as trying out a lineup with Randle and Toppin together, swapping Rose for Walker, or other things like that before swinging the fences for a blockbuster trade.

Picking up a name like Lillard would definitely get fans excited, and it’d blow their championship window wide open, at least in the short term. Barrett, Toppin and Robinson are still developing, and if they continue their arc, the team will be competing for a decade versus a matter of years.

It’s a tough decision for the Knicks to make, but for a team that hasn’t tasted real success for decades, perhaps a big trade is what they need.

At the very least, it does seem like a different lineup is needed if the team wants to make it back to the playoffs for a second season in a row.

Loading more stories
wpDiscuz
0
0
Would love your thoughts, please comment.x
()
x
| Reply
A trade might be needed for the New York Knicks.