Throughout much of the offseason, the New York Knicks have been linked to a blockbuster trade with Damian Lillard.

While it appears like the Portland Trail Blazers will be going into the season with their star still on the roster, that hasn’t stopped the rumor mill from swirling.

The Knicks definitely have the young talent to flip in a potential trade, but the team has to decide whether it’s worth it or not. Things have become complicated even further thanks to the signing of Kemba Walker.

With that acquistion, the Knicks appear to be set at point guard, but anything can change over the course of a season.

For what it’s worth, Immanuel Quickley’s game has caught the attention of Lillard. On his Instagram story, he responded to a quote from Ekam Nagra on the BDS Podcast talking about Quickley.

Lillard is a Fan of Quickley 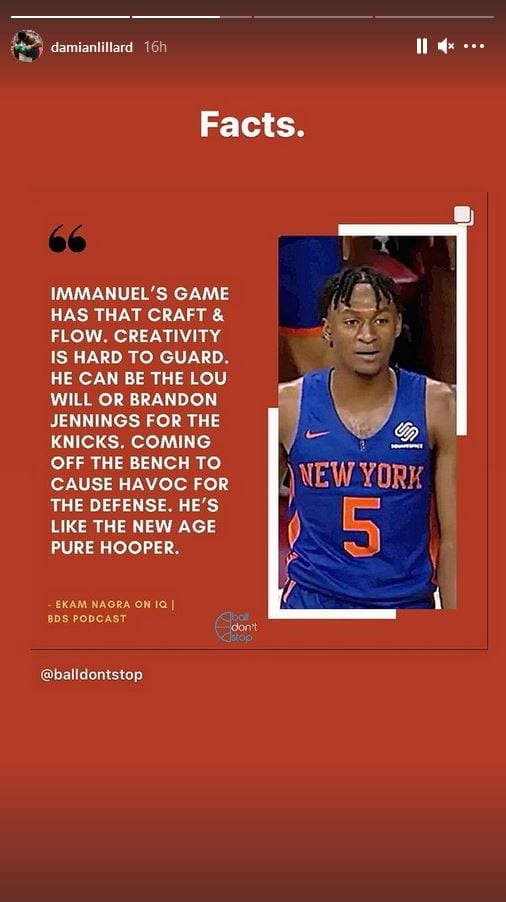 While Lillard didn’t shower the praise himself, he did give it a resounding cosign, by simply saying “facts.”

“Immanuel’s game has that craft and flow,” said Nagra. “Creativity is hard to guard. He can be the [Lou Williams] or Brandon Jennings for the Knicks. Coming off the bench to cause havoc for the defense. He’s like the new age pure hooper.”

With the signing of Evan Fournier, Quickley is almost guaranteed to come off the bench, but going into his second season, there might not be a better situation for him.

He’s shown that he can shoot, and if he really could replicate a Lou Williams-type role, then the Knicks will be a big force to be reckoned with.

Williams is a 3-time Sixth Man of the Year winner, showing that he knows how to come off the bench and provide for his team. A large part of the Knicks’ success this season will rely on Quickley replicating that.

Now, what exactly does it mean for the Knicks that Damian Lillard has caught wind of Quickley’s talents? 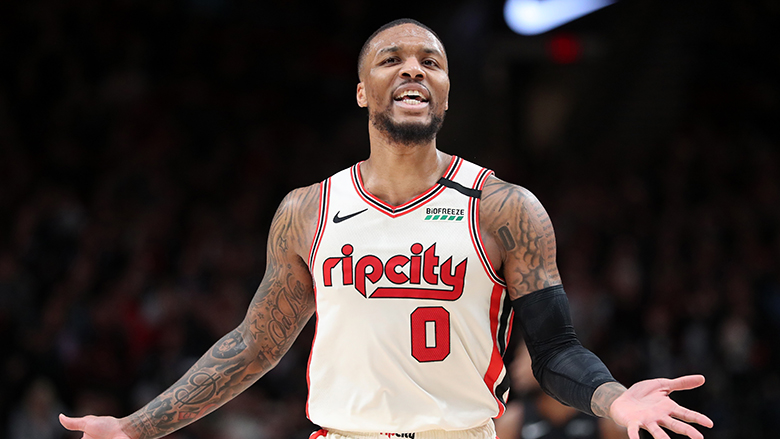 No matter what way you slice it, it’s hard to imagine a world where a trade for Damian Lillard wouldn’t include Quickley, so this praise might not mean a whole lot for fans.

There are some fans who might buy into the narrative that Lillard is scouting out the Knicks’ roster because he plans on joining the team, but that just doesn’t seem likely, despite all of the rumors.

On top of Quickley, the Knicks would likely have to include a lot of other key pieces like RJ Barrett and Mitchell Robinson, so that would almost certainly kill any potential deal.

The Knicks have a good, young core anchored by Julius Randle, so they’ll continue to build together barring any unforeseen blockbuster trades on the horizon. Perhaps there’s a way the team could lure Lillard in free agency, provided they aren’t proven title contenders with a stacked roster by then.

In the meantime, Quickley will need to deliver in a big way if we wants to live up to the praise he’s been getting in the offseason. He’s going to be playing a major role in the team’s success in the upcoming season and beyond.