While the New York Knicks might be done making big moves, as are most of the NBA teams around the league, there are still things that can be done before, and even during, the season to make improvements.

For example, we see a lot of veteran role players join playoff teams midseason in an attempt to win a championship, and the Knicks were eyeing sharpshooting guard JJ Redick for that very reason.

He’s been linked to both the Knicks and the Nets for the upcoming season, but it looks like he decided to go a different direction entirely.

Instead of joining a contender, he’s Redick is joining the retirement life.

After 15 seasons in the NBA, JJ Redick announced his retirement this morning.

On September 21, ESPN’s Adrian Wojnarowski tweeted that Redick has announced his retirement after 15 years in the NBA.

Redick also released a 6-minute video shortly after the announcement where he went into depth about his decision to hang it all up. He talked about how he meant for the previous season to be his last, but he wasn’t sure how it was all going to play out due to COVID and his injuries.

This was all part of the reason he told teams to let him wait until much later for him to decide whether to come back.

“I didn’t want to commit to anything until I was sure,” he said. “Well, I have some clarity now and it’s time. It’s time for me to be a dad.”

While he didn’t come away with the elusive NBA championship, Redick played a key role on several NBA teams over his 15 seasons.

He spent six and half seasons with the Orlando Magic before being shipped to the Milwaukee Bucks at the trade deadline.

From there, he joined the Clippers and was part of the team’s “Lob City” heyday with Chris Paul, Blake Griffin and DeAndre Jordan.

Redick closed out his career with two seasons with 76ers, two with the Pelicans and one with the Mavericks where he only appeared in 13 games.

Rather impressively, Redick participated in the NBA playoffs every year from 2007 to 2019.

Where Do The Knicks Go From Here? 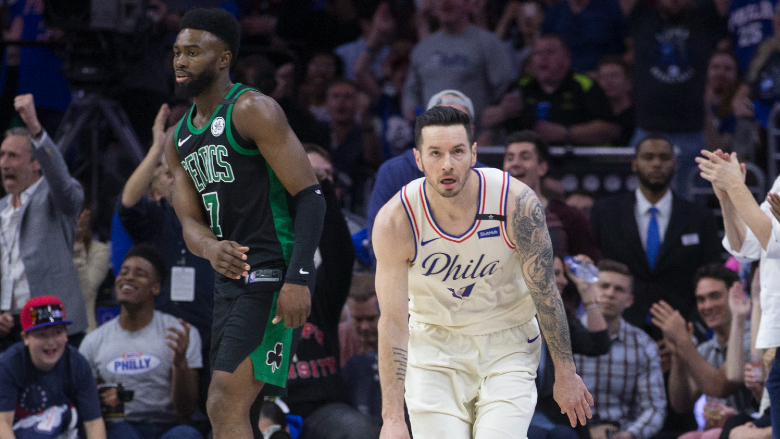 GettyJJ Redick, then of the Philadelphia 76ers, celebrates during a 2018 playoff game against the Boston Celtics.

Fortunately for the Knicks, Redick was never going to make or break their roster. Given the question mark around his injuries, commitment and ability to still perform at 37 years old, it seemed like there was going to be a lot more that could’ve went wrong for the team.

In today’s NBA, teams can always use more shooting, so if Redick did decide to stick around and look for teams to join, he would more than likely have been able to find one.

However, he decided to make a different decision, but it shouldn’t hurt the bottom line of the Knicks or Nets all that much. The Knicks have a lot of shooters on their team as it is, and with so much young talent already playing valuable roles, Redick would’ve only taken playing time away from somebody like Immanuel Quickley, who is already getting noticed by some big names around the league.