The New York Knicks feature one of the worst starting lineups in the league, and after being questioned about it for weeks, coach Tom Thibodeau made a massive change.

For the entire year, Kemba Walker has been the starting point guard for the Knicks, and while he boasts the worst plus/minus on the team, he’s been entrenched as the starter. Thibs has been known to stick with his veteran players, perhaps too long in some cases, but he has now pulled the plug on the Walker experiment.

As of November 29, the Knicks star point guard is completely out of the rotation, and it does not seem like he’ll be playing in the near future.

Kemba Walker is out of the Knicks rotation “as of right now,” Tom Thibodeau says. He says he will tighten the rotation moving forward. “It would be tough to play three small guards together,” Thibodeau says. Says he has great respect for Walker and all he’s accomplished.

Speaking to reporters, Thibodeau confirmed Walker would no longer be a starter, but he took it even further by saying he won’t even be playing going forward.

His reasoning for this is less about Walker but more about how the team would mesh with him coming off the bench.

“It would be tough to play three small guards together,” he said via The Athletic’s Fred Katz.

With Walker and Rose both out in the matchup against the Hawks, the Knicks started Alec Burks at point guard and he will now assume the starting role with team going forward. Rose will continue to be the sixth man off the bench, a spot that suits him quite well.

What Does This Mean Going Forward? 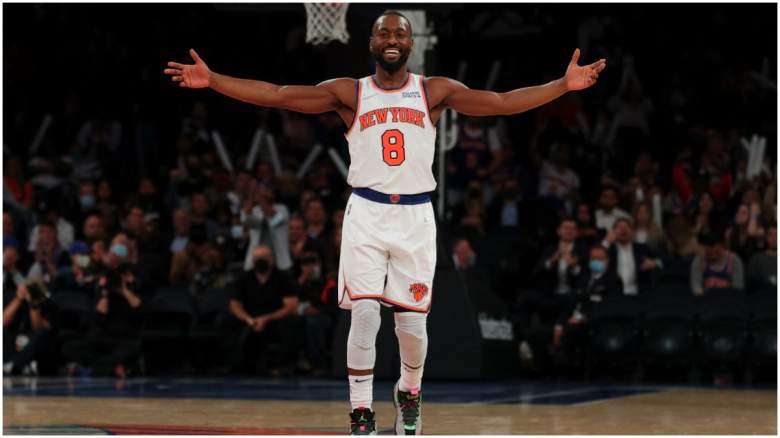 While Walker didn’t get Evan Fournier-type money in the offseason, he still signed a 2-year deal for close to $20 million, so having that much dead money doesn’t bode well for the long term success of the team.

On paper, his numbers don’t look all that bad as he’s shooting over 40 percent from three and putting up close to 12 points per game, but a starting point guard of Walker’s caliber is expected to do more.

His defense also leaves a ton to be desired, and perhaps that factors into why the team is outscored so much when he’s on the floor. At six feet tall, he’s never been known for being a strong defender, but when you factor in his injury history and his age, it doesn’t paint a pretty picture.

There’s still a chance that he can work his way back into the rotation in the future, but things are looking very grim. Coming off a max contract with Boston, the Knicks expected a lot more out of Walker, but things just haven’t panned out for them.

The Knicks are coming off a playoff appearance and their weak point was point guard, so they believed they made an upgrade in the offseason by replacing Elfrid Payton with Walker. It did look that way at first, especially in game one against the Celtics, but things unraveled quickly.

With games against the Nets, Bulls and Nuggets coming up, we’ll have to wait and see if this move will actually pay off for the Knicks who are just barely holding onto a playoff spot.

Loading more stories
wpDiscuz
0
0
Would love your thoughts, please comment.x
()
x
| Reply
The New York Knicks have made their decision on Kemba Walker.