The New York Knicks‘ lengthy pursuit of Jazz star Donovan Mitchell remains in a holding pattern as the clubs involved haggle over draft compensation in trade talks. Meanwhile, other teams — the Hawks, Hornets, Heat, Kings, Raptors and Wizards — have worked themselves into the mix for the Westchester native as well, per The Athletic‘s Shams Charania.

Clearly, though, Knicks president Leon Rose and his brain trust aren’t placing all of their eggs in the Mitchell basket.

New York has already done major roster work by re-upping with big man Mitchell Robinson, backing him with Isaiah Hartenstein and making Jalen Brunson the point guard of the present and future for the franchise.

More than anything, the Knicks and their fans are counting on the latter move to usher in a reversal of fortunes next season. To that end, one New York legend believes that the team may have hit the nail on the head.

Mark Jackson, who was born in Brooklyn and went to St. John’s before spending seven of his 17 NBA seasons with the Knicks, recently spoke to Insider about his involvement in the documentary NYC Point Gods. During the interview, he was also asked to weigh in on the Brunson signing.

Clearly, he believes that it was a winning move for his old team.

“I had the privilege of playing with his dad, [Rick Brunson], when I was on the New York Knicks and to watch Jalen grow,” Jackson said. “He’s a winner. He’s a culture-changer. He’s a guy that competes on a nightly basis and a true professional and a class act. So, I think it was a home-run signing for the Knicks and a step forward. They got better over the course of the offseason.”

Jackson noted that there are unique challenges involved with being a second-generation pro. However, he is of the firm belief that the younger Brunson has handled them in an ideal fashion.

“It’s tough to be a kid of a professional athlete and the demand and the expectation that’s put on you,” Jackson said. “And he has not disappointed. He carries it the right way.”

The 25-year-old Brunson appeared in 79 games for the Mavericks last season. Along the way, he averaged career highs in points (16.3), assists (4.8), rebounds (3.9) and steals (0.8) per contest. He also connected on 50.2% of his shot attempts as a backcourt player while boasting an efficacy of 37.3% from three-point range.

Incidentally, his work against Mitchell’s Jazz during the first round of postseason play may have been as responsible as anything for netting him a four-year, $104 million payday from the Knicks.

During that series, Brunson dropped a pair of 30-plus point games and averaged 27.8 points, 4.8 rebounds and 4.2 assists in 38 minutes per contest. 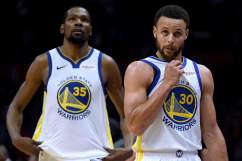