The New York Knicks have an issue with their starting lineup, but their bench has shined so far this season.

Anchored by veteran Derrick Rose, but also featuring youngsters Obi Toppin and Immanuel Quickley, this group has proven they can compete with just about any other bench in the NBA, and it some cases against starters.

In fact, the bench might even be too deep as rookie guard Miles McBride, a player who coach Tom Thibodeau has praised in the past, has been sent down to the Westchester Knicks.

Westchester is the home of New York’s G-League team, and it’s a place where McBride could get some consistent game action because he’s not going to get a bunch of it with the team otherwise.

In his opening game since being sent down, he’s shown that he could potentially have a bright future in the league.

Miles McBride is a different breed! He went crazy in his G League debut with the @wcknicks. 👏

In his opener with the team, McBride chipped in 25 points, nine assists, five rebounds and most importantly, the win.

While it’s not against true NBA talent, performances like this are still important because it proves that McBride can ball, and it’s a way for him to hone his skills in live game scenarios.

He put up 24 total shots, the most on the team, and sank 10 of them, so there could be more efficiency there, but it’s a nice start. The most eyebrow raising stat is he went 2-9 on three pointers, something that will have to improve mightily in the future.

Having nine assists on three turnovers isn’t the end of the world, but he also played 41 minutes, so he was on the floor for nearly the entire game.

While there is a G-League championship, it seems like the purpose of the league is let young players get a lot of playing time so their big league counterpart can see what they have in them. A lot of the times, it ends up being beneficial for the G-League team. Having Miles McBride the whole season can only mean good things for the Westchester Knicks.

Could He Play in New York? 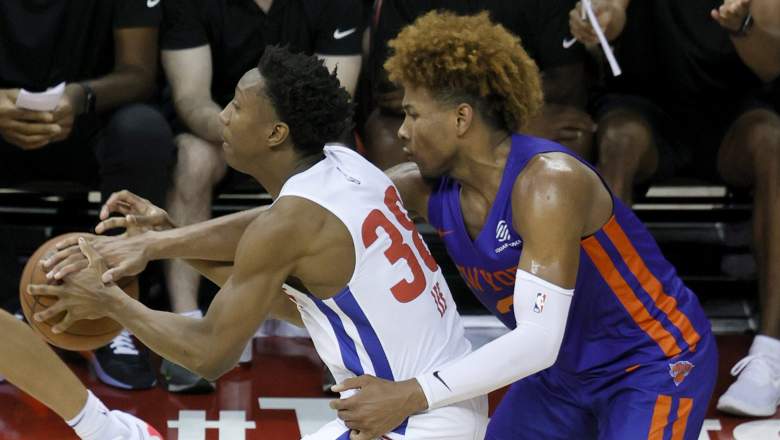 GettyMiles McBride getting some rare NBA minutes against the Detroit Pistons.

There’s not really much of a chance for him to play this season with Kemba Walker and Rose in the lineup, so he might be spending a lot of the season in the G-League.

Something that is working well in his favor is his age. Walker and Rose are definitely closer to the end of their careers than they are to the beginning, so McBride’s time to shine might come fast.

The Knicks have a good, young core to build around and they should be set up quite well for the future. The team will continue to develop and hopefully by the time Rose and Walker depart, McBride will be ready to take the reigns.

He was a second round pick, which means his work is definitely cut out for him. However, Mitchell Robinson was also a second rounder, and when he’s healthy, he can be a starting center in the NBA. Just because you’re a late round pick doesn’t mean you can’t carve out a successful career.