The New York Knicks are getting ready to kick their season off against Eastern Conference rival Boston Celtics and they are looking to prove that last season wasn’t a fluke.

After securing the fourth seed, the team made some big upgrades in the offseason, notably signing Kemba Walker and Evan Fournier. Both players will figure to play big roles with the team, but the Knicks will also be counting on the development of some of their younger players.

One such player is center Mitchell Robinson, who has dealt with a series of injuries in his short career. In August, Robinson set a goal for himself that would result in him hoisting the Defensive Player of the Year trophy at the end of the season.

Man let me lock in bro I definitely can either get DPOY or at least be in the conversation #personalgoal https://t.co/UJhgEZApaj

A big part of achieving his goal will be staying healthy, something he hasn’t necessarily proven he can do so far in his career. He missed 41 games during the 2020-21 season and postseason after breaking his foot in a March 27 game against the Milwaukee Bucks, and after playing in the last preseason game, it was clear that he still needs a bit of time before he’s really ready to lock in and get to work, but it looked promising.

With Nerlens Noel banged up to start the season, the Knicks will be relying on Robinson and veteran center Taj Gibson to fill the void.

Aye man for me to get DPOY gotta get in elite shape !!! ✨Run Run Run that’s the key to success in this League✨ once I get that I’ll be dangerous LETS GO BE GREAT 👍

On October 18, Robinson acknowledged that he’s not in the best shape he can be, which means his DPOY run will be in jeopardy if he can’t get there.

If he remains injury-free, then it’s a place he can get to relatively soon. It might be a process, but he sounds like he’s willing to put in the work.

“Aye man for me to get DPOY gotta get in elite shape,” he tweeted. “Run run run that’s the key to success in this league. Once I get that I’ll be dangerous. Let’s go be great.”

Something that Robinson has always been known for is his defense, and when’s he healthy he can be a dominant force around the rim. Of course, that’s been a big question mark so far into his career, and it might have even cost him a bunch of money that would have come in the form of a contract extension. 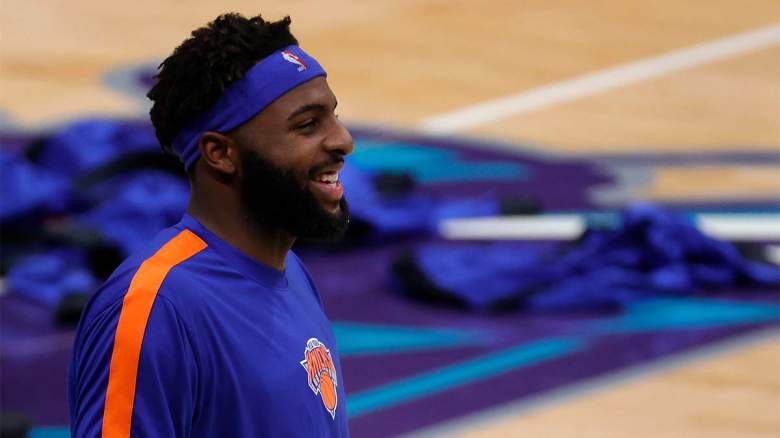 Winning Defensive Player of the Year is something that’s certainly possible for the young center, but he’s going up against some stiff competition. Rudy Gobert seems to be locked in as the favorite each season, and with Ben Simmons returning to the Philadelphia 76ers, he might have something to prove in the upcoming season.

Simmons was the runner-up last year, and he’s proven he can defend pretty much any player in the league, partly thanks to his insane length, standing at 6-foot-11 plus his arms’ reach. Robinson will definitely have his work cut out for him if he wants to be considered the best — especially with Brooklyn Nets point guard Nic Claxton claiming he’s the best defender in the league.

It will be an exciting aspect of the season to watch as the Knicks look to make another run to the playoffs for the second season in a row.