The New York Knicks have gotten off to a great start this season, but they have not been able to avoid the injury bug.

Both Mitchell Robinson and Nerlens Noel have been banged up to start the season, and both of them are now questionable in the Wednesday matchup against the Milwaukee Bucks.

This is part of reason why the team prioritized bringing back Taj Gibson, a Tom Thibodeau favorite who has shown he still has some gas left in the tank. He likely didn’t expect to get a lot of starts this season, but it’s looking like he could be on the verge of one if Noel and Robinson are unable to go.

This is another setback from Robinson, who has the goal of winning Defensive Player of the Year this season. It’ll be difficult to do that if he’s unable to stay healthy.

Another player who will be benefiting from this unfortunate situation is rookie center Jericho Sims. As a late second round pick, Sims didn’t figure to get a lot of playing time this season, and that’s been the case so far as he’s only appeared in five games this season and he’s averaging just five minutes in those contests.

Sims has proven to have a lot of athleticism, but he has a long way to go before he can lock down consistent playing time.

Sims could step into a starting role or get a lot of minutes off the bench in this matchup against the Bucks if neither Noel or Robinson are able to go.

Alternatively, Thibs could go small and give Obi Toppin the playing time he desires. Thibodeau has gained a reputation over the years for relying too much on his starters and not utilizing his bench enough.

Julius Randle is ninth in the NBA in minutes per game so far, so an argument can be made that he’s not playing Toppin enough to get Randle a breather. A special opportunity has opened up here that will allow the two to play together, something that spurred a comeback earlier in the season. 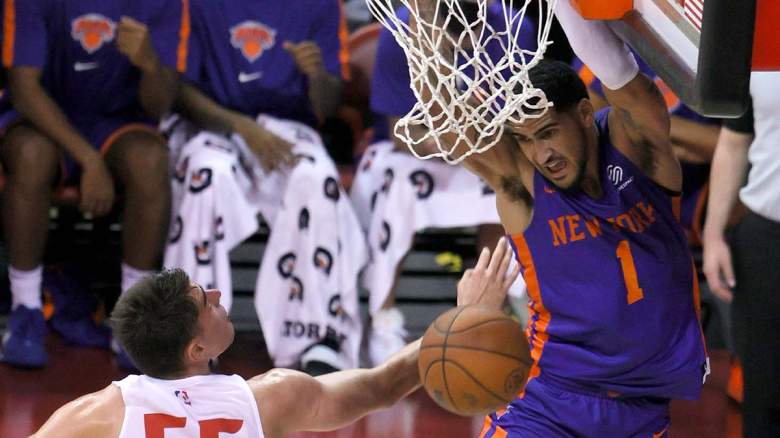 Obi Toppin is a former lottery pick and it’s hard to imagine him getting just 11 minutes per game on any other team in the league, but that’s the way the dominoes have fallen so far.

He’s averaging a little over seven points per game on the season and he’s appeared in every game, so it’s clear Thibodeau does believe in his youngster, but fans would certainly like to see him try a bit harder to get him more involved in the rotation.

Gibson, who has only appeared in six games, averages over 18 minutes per game when he plays, which is higher than both Toppin and Immanuel Quickley. Thibodeau’s reputation of relying on veterans appears to be earned, but that might not be a good thing going forward.

The team is off to a 7-4 start, so he’s obviously doing something right. However, if the injuries continue to pile up like they have, he might be forced into giving some of the youngsters more minutes.