This offseason has been big for the New York Knicks as they were able to address several key positions and upgrade their roster from the previous season.

The two big additions the team made were the addition of Kemba Walker and Evan Fournier, two players who could potentially slot right into the starting lineup depending on the direction coach Tom Thibodeau wants to go.

While adding better players to the roster is the quickest way to improve a team, something the Knicks will also be counting on is the young players taking another step forward.

One of these players the team will be relying on is RJ Barrett, someone who is looking to make a big leap forward in his third season.

To his credit, Barrett came into his own as a shooter in his sophomore season, shooting a very respectable 40 percent from behind the arc.

A lot of players make a big jump in their third seasons, and if this offseason run is anything to go by, then he is on the verge of one.

In a highlight video from Drew Hanlen’s Pure Sweat runs, Barrett looks like he’s added a lot of tools to his arsenal.

On top of his high-flying dunks, he was able to hit pull-up threes and catch-and-shoot with ease. These are things he’s shown flashes of in the season before, but seeing it all come together like this in a single game is impressive. The 40-second video even shows him hitting a step-back jumper almost effortlessly.

Before we get too far ahead of ourselves, it’s important to note that a lot of players look like they’ve figured it all out in the offseason only for none of it to translate over to the regular season.

The good thing is that we’ve seen Barrett show flashes like this before, so it’s not like he’s adding a 3-pt shot out of nowhere. Whether he can put it all together in games that matter remains to be seen, but this is a nice sight to look at. 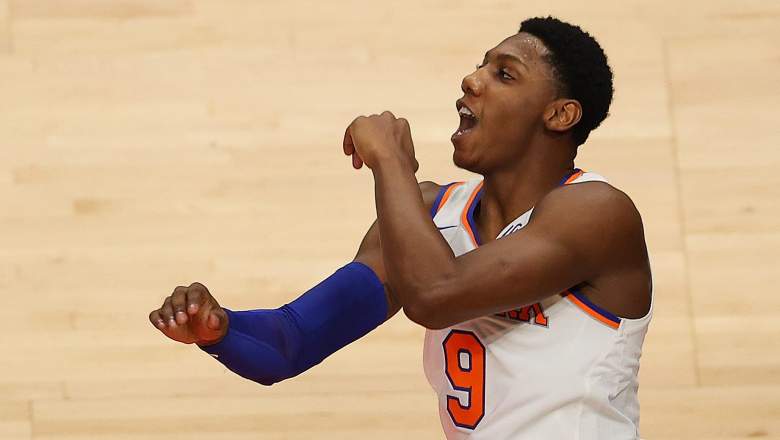 There’s still about a month left before the season kicks off, so players who want to get some last-minute reps in still can.

With Barrett looking this good already, he likely can’t wait for the season to get started. While many of the same cast that secured the fourth seed in the playoffs is returning, there are still some players who’ll need to build chemistry with each other.

Walker and Fournier are going to be very vital cogs in the upcoming season, so they will certainly need to get some work with the rest of the team.

There are a lot of expectations for the team in the upcoming season with these signings. On top of this, the Knicks will also be hoping players other than Barrett take a step forward.

After a disappoint first-round exit despite having home court, the Knicks are definitely look to make a bigger splash in the postseason. Perhaps all of it will come together and the team will be able to do just that.