Rappaport told the Philadelphia Inquirer prior to the games starting, “I have no hesitation in going to Tokyo. Our competitions for triathlon resumed in September of last year, and they all involved significant travel and little to no spectators, so I am very used to that by now. I raced in a strict bubble scenario in Yokohama, Japan, in May, so I also got a chance to see what some of the entry rules and restrictions we are facing for the Games are.”

The 30-year-old Rappaport is joined on the women’s triathlon team by Katie Zaferes and Taylor Knibb. Rappaport told the Inquirer, “I started competitive swimming at age 9 after watching the Sydney Olympics in 2000. Although my sport changed as I was introduced to new opportunities, I’ve spent my entire life working for the [chance] to compete at an Olympic Games. So to be in the final approach to the Games, 23 months after I qualified, is thrilling and means the world to me.”

Here’s what you need to know about Summer Rappaport’s husband, Ian Rappaport, and her family:

1. Rappaport Was Born & Raised in Colorado as the Only Child

Summer Rappaport was born as Summer Cook in Denver, Colorado, and she was raised as the only child of Debra and Wendell Cook in Thornton, Colorado, according to her biography on the Villanova Wildcats website. She is a graduate of Mountain Range High School and studied political science at Villanova University, graduating in 2012.

Rappaport told Inner Voice, “I feel like my parents really worked hard to make sure that I was independent. We talk every day, which makes it easier to be away from them.” She added that her parents “have been incredibly supportive of me since the start of my athletic career. Until I left for college, my parents didn’t miss a single swim meet, and they still made it to all of my major competitions when I was in college. Their unconditional support of me, whether I was setting a personal best or placing last, encouraged me to continue pursuing sport through the rough times and led me to become the resilient competitor I am now.”

Rappaport told TeamUSA.org, “I think this past year in particular, knowing kind of what I’m giving up not having a normal first year of marriage or normal relationships with my family because I’m away so much keeps me motivated. I really want to make this worth it, see this through and find out what I’m capable of. I have a little extra fire knowing in the route to pursuing this I’ve given up some normalcy. It’s really difficult but I think it’s helped take me to the next level.” 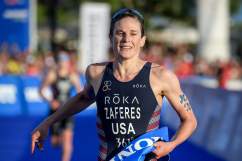 2. Summer Rappaport & Her Husband, Ian Rappaport, Have Been Married Since 2018

Rappaport told Inner Voice in 2018, “I did a lot of wedding planning in the first half of the season. We were only engaged in January, but there’s only about a three-week window where a professional triathlete can get married, so we wanted to do it this year. We’re planning to do our honeymoon next November in New Zealand, which is one of my favorite places that I’ve raced. I’ve only been to New Plymouth, which hosted a World Cup race, so I’m really excited to get to go and see some different places and actually see the country properly.”

Summer Rappaport wrote on Instagram in 2019, “I’m extremely lucky to have Ian in my life. As the demands of professional triathlon in my life continue to grow, I could not continue to do this without this special someone in my corner. Not many people understand what we do and why we do it, especially when it involves being away from your s/o for months at a time. I’m fortunate to have Ian constantly encouraging me and supporting me to chase my goals, even when they aren’t convenient. Here’s to a lifetime together.”

On her wedding anniversary in November 2020, Summer Rappaport wrote on Instagram, “Today makes two years married to the love of my life! 2020 hasn’t been easy, but I’m grateful for the unplanned time we got to spend together. Here’s to many more years of adventures and riding life’s peaks and valleys.”

3. Rappaport Went to Villanova University, Following a Dream of Going to College on the East Coast, Where Her Dad Is From

Rappaport attended Villanova University, where she was a runner on the school’s cross country team and a swimmer on its swimming and diving team, and it was her father who was part of her inspiration to go to college in Philadelphia. “I had always been interested in going to college on the East Coast,” she told the Philadelphia Inquirer. “My dad grew up in New Hampshire, and when we would visit family there, we would often take trips to various cities down the seaboard, including Philadelphia.”

Rappaport leaned on the support of her family as she transitioned from being a two-sport Division I college athlete to attempting to become a professional triathlete and eventually an Olympian. She told TeamUSA.org, “I was so inspired by the dominance of the U.S. swim team (in 2000) that I wanted to start swimming. It’s crazy to think that decision to start swimming almost 20 years ago led me to qualify in triathlon. I’m just thrilled and I’m so excited to come back to Tokyo next year.”

She told TeamUSA.org, “When I began triathlon, I had no experience with biking. I actually didn’t even know that there were different kinds of bikes for different disciplines of training/racing until I joined the (USA Triathlon Collegiate Recruitment Program). … I first began thinking of a future in triathlon around my sophomore year at Villanova. At the end of my freshman year, I entered a 10-mile road race for fun and surprised myself with the time I ran. My swim coach recognized my running talent and put me in touch with the cross country/track and field coach to walk onto the team. I entered my first triathlon in the summer of 2013 and earned my professional license in early 2014 and began competing on the international circuit later that year.”

Rappaport added, “At this point in my career, I would like to improve my biking the most. Over the past Olympic quad, the top-level bike courses have become more technically demanding, and the level of cycling in the races has risen. My current training regimen is about 25 to 30 hours of training per week, not including calls with sports psychologists and nutritionists, as well as time spent on physiotherapy. In college, I trained about 20 hours per week between swimming and running, but between my course schedule and a demanding competition schedule, I wasn’t able to prioritize recovery properly. My current regimen includes much more sleep — nine to 10 hours per night — and time spent preparing nutritious meals.”

4. Rappaport & Her Husband Live in North Carolina With Their Dog, Kona Bologna

Rappaport and her husband relocated to Durham, North Carolina, for his job in 2020, according to Triathlete.com. The website wrote about how Rappaport dealt with the year delay between when the Tokyo Olympics were set to take place and when they are actually happening:

Rappaport headed back to Durham, North Carolina, to be with her husband—except she had actually never lived in Durham before. They had moved there for his job. And usually she’s traveling for races and camps. She had to navigate a new town in the midst of a pandemic. There’s been an upside, though. It’s been a nice chance to spend more time with her husband, an age-group athlete himself, and get some rides in together. It’s the most time they’ve spent together straight—without her having to fly off—since they first started dating.

‘It’s been very odd to be in one place for eight weeks,’ she said.

The Rappaports live with their dog, Kona Bologna. Summer Rappaport wrote on Instagram.

Rappaport told Inner Voice, “I think my competitiveness is mostly in sport, but I can get wound up over silly things like board games. I think my husband is pretty competitive as well, so when we get going at Scrabble it can be pretty funny.”

5. Rappaport’s Family & Friends Have Been Supporting Her From Afar as She Prepares for the Olympic Triathlon in Tokyo

Rappaport is receiving support from her family and friends from afar while she is in Tokyo. Before her race, she wrote on Facebook, “Huge thank you to everyone who sent letters or wrote on the Kudoboard Ian set up. I cried a little reading everyone’s kind words and promise I’ll get back to everyone once I’m home!”

In June, Rappaport wrote on Facebook, “While it’s not ‘new’ news as I’ve been qualified for 22(!) months, it’s starting to feel very real as the remainder of Team USA has been named for triathlon today. I’m looking forward to competing alongside a class crew of 🇺🇸 athletes in Tokyo! The opportunity to compete at the Olympic Games is one that I’ve dreamed of as long as I can remember and only those closest to me will ever know how many times I’ve had to double down on my commitment to sport and invest in myself in order to achieve this goal. I’m grateful for an amazing support system that stands by me through everything as I double down once more as I work towards achieving my goals in Tokyo. I can’t wait to represent my country, my family, and the rest of my support system at the pinnacle of the sport next month.”

Ian Rappaport told WRAL, “It’s kind of surreal. It was this abstract concept for so long. Even after she qualified, it was obviously a long, long wait. I think it really hit home this week now that she’s there.”

Loading more stories
wpDiscuz
0
0
Would love your thoughts, please comment.x
()
x
| Reply
Summer Cook Rappaport is an American triathlete who is competing in the women's triathlon at the 2020 Tokyo Olympics. Rappaport is a Colorado native. Her husband is Ian Rappaport.