Everyone knew it would happen; just maybe not this soon. We’re a game and a half into the 2022 NFL season, and chants for Kenny Pickett are in full force.

Because the Pittsburgh Steelers offense is at the bottom of the league statistically, of course, it’s got to be the quarterback. And making a change would fix everything, right?

Steelers fans want Mitch Trubisky to get the ol’ heave-ho and made that abundantly clear by booing him during the Sept. 18 home opener against the New England Patriots. They want the shiny new toy, not the old hand-me-down. Many in the fan base called for someone new to replace Ben Roethlisberger during the two-year dry spell in which Pittsburgh failed to make the playoffs, so they’re getting antsy. 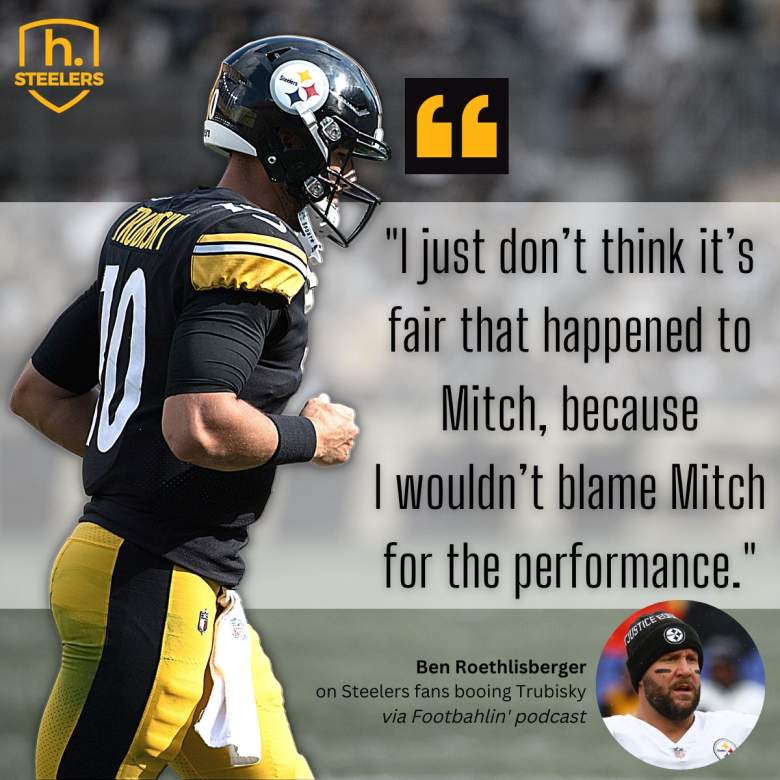 “As veteran quarterback Mitchell Trubisky has failed to surpass 200 passing yards in either of the first two games, Yinzers have been screaming on 93.7FM The Fan, and to anyone who will listen, that it’s time to get a look at first-round rookie Kenny Pickett,” Heavy’s Senior NFL Reporter Matt Lombardo wrote.

Roethlisberger’s Hall of Fame play spoiled the fan base for future quarterbacks, and Trubisky is feeling the backlash of that.

“It is what it is. You just continue to block it out and play football,” Trubisky said in a Sept. 18 postgame press conference.

The former second-overall draft pick is used to it. He spent four seasons in Chicago, where fans are as hard on their quarterbacks as in Pittsburgh.

But this isn’t the Fan Controlled Football League. It’s the NFL, and Mike Tomlin gets to put whoever he wants in there at quarterback. And he’s not ready to budge on Trubisky.

Fans aren’t the only ones hooked on the Mitch Trubisky-Kenny Pickett debate. Lombardo spoke with AFC executives with varying opinions on what should happen in Pittsburgh.

“They absolutely should go to Kenny Pickett, today,” an AFC Scouting Director told Heavy. “Mitch has never been a winner.”

It’s not necessarily true that Trubisky has never been a winner — he did take the Chicago Bears to two playoff appearances in three years. You have to be a winner to do that, but Trubisky never took them further beyond the Wild Card round.

The other side is where the Steelers’ brass appear to the standing firm — at least for now — along with an AFC offensive coordinator who believes playing Pickett this early in the season is the wrong move.

“Not yet. The last thing you want to do is risk rushing him,” an AFC offensive coordinator told Heavy. “If I were in that room, I’d let him develop through the year. But, if it gets to the point that things aren’t going well after Week 6 or 7, that’s the perfect time to make the move.”

Appearances aren’t everything, but the rookie appears ready to play. And while exhibition football is rarely a solid litmus test for how players will perform in-season, Pickett passed. Per PFF, he completed 29-of-36 passes (80 percent completion) for 261 yards and three touchdowns. Pickett also took care of the ball, not once committing a turnover.

Matt Lombardo believes the rookie could “deliver the spark the Steelers desperately need in a hyper-competitive AFC North.”

Nagy hosted Pickett at the 2022 Senior Bowl and watched him play in the preseason.

“For a young guy in the NFL, a rookie to come out of the chute, a lot of it is tied into the work ethic of a kid like Kenny [Pickett],” Nagy told Heavy. “If you put in the work, the veterans on that team will follow you. I don’t know if they’ll go in that direction with him, but I do know if they put him in, he’s going to have the full support of all 10 other guys in that huddle.”

“I just haven’t seen an offense that Kenny Pickett has run over the last three years, where he didn’t move his guys,” Nagy explained. “I caught a few of their preseason games this summer, and he certainly didn’t look like a rookie from knowing where to look to go with the football, making quick decisions, he looked like a pretty experienced guy.”

The Pittsburgh Steelers’ intention could be to invest in Kenny Pickett’s longevity by holding off as long as possible to throw him into the fire.

It’s partially due to ATTT that the Steelers have been able to hold off on investing in their offensive line via the draft over the years. But they can’t hold off much longer if the plan is to start Pickett before Trubisky leaves in 2024.

Although Trubisky was sacked three times as much in Week 2 than Week 1, the line is said to be steadily improving, per PFF. The unit climbed two spots to No. 28 after the Steelers’ Patriots loss.

Pickett’s processing speed could be the deterrent in Pittsburgh making the switch. He averaged 3.2 seconds per throw at Pitt, which PFF says is a “glacially slow time that typically gets longer for young quarterbacks entering the NFL.”

In the preseason, Pickett picked up that speed while leading the offense while averaging 2.43 seconds per throw.

The only reasons that Kenny Pickett is not starting are: Tomlin made a commitment to Trubisky that he’s putting above winning. Tomlin commented publicly that he was staying with Trubisky and has too much pride to say that his decision may have been wrong.

All of the chatter about protecting and growing Pickett while he’s on the sidelines is a bunch of hogwash to excuse bad decisions. I don’t know if Pickett is the answer, but it’s worth finding out before the Steelers have a losing season!

Loading more stories
wpDiscuz
1
0
Would love your thoughts, please comment.x
()
x
| Reply
It's time for the Steelers to bite the bullet and hope for the best.