Getty T.J. Watt is introduced before the game.

Mike Tomlin has often said that T.J. Watt isn’t human. “T.J. is visiting from another planet” were his exact words.

Watt has shown he’s from another planet through unworldly acts on the football field in the form of historical statistics. But even when Watt’s injured he proves he isn’t human.

It started in the Sept. 22 Thursday Night Football pregame warmup. Watt wasn’t playing against the Cleveland Browns, but that didn’t stop him from warming up like a rockstar.

NFL Network’s Tom Pelissero tweeted a video of Watt running sprints and doing big arm circles — enough to make a Steelers fan nervous that he was doing too much, too soon.

Eleven days after his pec injury, #Steelers star T.J. Watt is out here running sprints and going through an extended pregame workout. pic.twitter.com/W2tTj3iIUm

To top it off, in a newly-released video, Watt isn’t holding back. DK Pittsburgh Sports tweeted a Sept. 28 video, courtesy of Corey Crisan, of Watt performing individual drills and hitting the sled at practice.

There’s no doubt that T.J. Watt, who tore a pectoral muscle in the Steelers’ sole victory of the season versus the Cincinnati Bengals, will be back after serving his four-game injured reserve sentence. The Steelers are lucky that it wasn’t the initially-feared full pectoral tear, which would’ve sidelined him for the season.

If all goes well — and it appears that it is — Watt will return Week 6 for Pittsburgh’s Oct. 16 matchup against the Tampa Bay Buccaneers. Knowing his dedication and competitiveness, Watt is probably clawing his eyes out that he can’t return sooner. All he can do is watch from the sideline as his teammates struggle without him.

Watt to Do Without T.J. Watt

Pittsburgh Steelers fans know how significant the loss of T.J. Watt is. He’s the reigning Defensive Player of the Year, and when a player of his caliber can’t suit up, it has a devastating impact on the team as a whole.

In the six games Watt’s missed in his six-year career, the Steelers haven’t one win. They’re 0-6 without Watt, allowing 26 points per game, and averaging fewer than 2.0 sacks per game. With Watt, it’s a whole different story as Pittsburgh has a 52-24-2 record with 20 points per game allowed and 3.5 sacks. 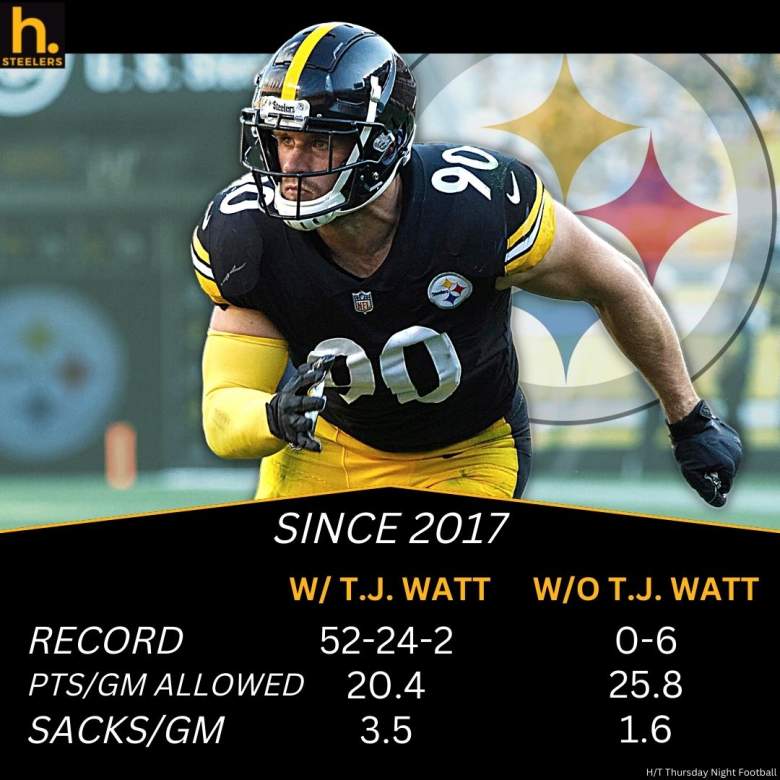 Pittsburgh’s defense has struggled mightily. The Steelers’ offense ranks 31st in the league with only the Chicago Bears faring worse. Their offense lacks rhythm and, consequently, has an inability to convert on third down. The Steelers have a 33 percent three-and-out rate, making it tough for the defense to get the blow it needs to perform at a high level.

Here's the rate at which offenses have gone three and out through 3 weeks of the season. The Bears have been not good while the Eagles have been amazing.#nflverse pic.twitter.com/E0gSTP2cqd

The Steelers take on the New York Jets at home at Acrisure Stadium on Oct. 2. Then, they travel to Buffalo for what will be their biggest test of the year in Josh Allen‘s Bills. It’s expected to be Watt’s final game on injured reserve.

Pittsburgh will need Watt back in the lineup if they have any hopes to salvage the first half of the season, which includes Tom Brady’s Tampa Bay Buccaneers, followed by two of NFL’s unbeatens in the Miami Dolphins (Oct. 23) and the Philadelphia Eagles (Oct. 30).

It’s obvious that Watt’s talent isn’t replaceable and we’re seeing that first-hand. Linebacker Malik Reed, who the Steelers traded for less than two weeks before the injury to Watt, has been a mixed bag. On a team that’s 29th versus the run, Reed is currently fourth in run stop win rate but has failed to get pressure on the quarterback.