Getty Tom Brady has some explaining to do.

The daughter of the silversmith who designed the original Lombardi Trophy thinks Tom Brady should apologize for tossing the trophy from one boat to another during the Bucs’ Super Bowl boat parade.

Brady launched the Lombardi Trophy from his boat to another at the Super Bowl parade on Wednesday, February 10,  after the Tampa Bay Buccaneers won Super Bowl LV on February 7, besting the Kansas City Chiefs 31-9.

ALL the latest Bucs news straight to your inbox! Join the Heavy on Bucs newsletter here!

She called it insulting, as her father played a major role in the design of the first Lombardi Trophy with Tiffany & Co., according to DelasBour.

Lorraine Grohs says that Tom Brady's trophy toss is insulting to her family's legacy and would like an apology.

She is the daughter of Greg Grohs, the master silversmith who crafted the very first Lombardi Trophy. #GoBucs pic.twitter.com/sdElEcHmgp

“It takes a lot of work — a lot of hard work. A lot of hard hours go into it,” Grohs told DelasBour. “It just really upset me that this trophy was disgraced and disrespected by being thrown as if it was a real football.” 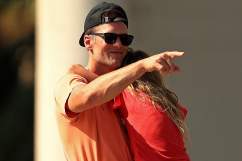 The sterling silver trophy, named for Hall of Fame coach Vince Lombardi, is worth more than $10,000, according to the Pro Football Hall of Fame.

It weighs 6.7 pounds, and the trophy’s football features the same dimensions as a regulation football, according to the Hall of Fame website. Grohs said her father “chiseled the seams” of the trophy’s ball, per DelasBour.

The company doesn’t make the Stanley Cup, won by the Bucs’ pro sports neighbor, the Tampa Bay Lightning in 2020. Rather than making a new Stanley Cup — which is officially named the Dominion Hockey Challenge Cup, according to USA Today — every year, the year’s new champion team receives the original Stanley Cup, now nearly 130 years old. The trophy has been repaired over the years, and the original bowl was retired to a permanent place at the Hockey Hall of Fame after becoming “too brittle to travel,” USA Today wrote. The Hockey Hall of Fame keeps a complete replica of the trophy on display, according to USA Today.

The Stanley Cup has also been in the news for NHL players treating it in many creative and unseemly ways, including several involving water; in 1999, the trophy was severely damaged when a member of the Dallas Stars tossed it from a balcony not quite into a pool below, per Bleacher Report. 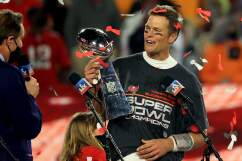 When Brady tossed it from his boat, Bucs tight end Cameron Brate caught it amid a crowd of teammates laughing and cheering. The video went viral, too.

Brady's angle of his Lombardi Trophy toss is WILD. 😱

The trophy was real, not a replica, Florio wrote, and if Brate hadn’t made the catch, it could have ended up 80 feet down at the bottom of the Hillsborough River.

“I didn’t sleep for the past two nights because of this,” Grohs told DelasBour. “I was that upset because I know the passion that goes into this trophy, how my dad and all his fellow silversmiths are so proud to make this.”

Her father worked with Tiffany & Co. from 1964 to 1994, she said. The NFL held its first Super Bowl in 1967, with the Green Bay Packers lifting up the first trophy — then called the World Professional Football Championship Trophy, according to Bleacher Report. It was renamed the Lombardi Trophy after Lombardi’s death in 1970.

Grohs, a Fort Myers resident, said she isn’t a big football fan and only watches the end of the Super Bowl for the moment when the Lombardi Trophy is presented, she told DelasBour.

“I like to see all the owners and the football players just hold it up with such pride and hold it up and show everybody — I get goosebumps,” Grohs  told DelasBour.

Brady gave her goosebumps as many as seven times before Wednesday. Known to post to social media quickly after wins and the parade, Brady hasn’t posted an apology on Twitter, Facebook or Instagram as of Saturday since Grohs’ interview first aired on Friday.

Loading more stories
wpDiscuz
0
0
Would love your thoughts, please comment.x
()
x
| Reply
Tom Brady may not receive a Valentine card from a Lombardi Trophy maker's family this year despite hoisting seven of the esteemed trophies, more than any NFL franchise.