For those single-player fans out there, we just got a tiny hint of what to expect in the mode. Gun Media’s Wes Keltner tweeted out the following:

MP starts at reel 4 (everyone knows jason is there.)

SP starts at reel 1. AI victims have no idea.

The start to every round in Friday the 13th begins with Jason axing, spearing, stabbing or chopping a counselor and then we get treated to Chad’s horrified look as all the counselors scatter. This tweet suggests the single-player campaign will begin with the counselors being unaware of Jason.

This leaves the door open to many opportunities, and could even put players into the shoes of either Jason or the counselors. It’s possible the single-player mode will follow in a similar vein of the films, where characters head to a campground but don’t suspect Jason will actually kill them, but instead they just know the legend of him. We’re excited to see where this can go. We might even see more about the muddled lore of Jason Voorhees.

Today, Friday the 13th came out with a hotfix that targeted the Packanack Lodge glitch. The fix stops players from accessing the roof of the lodge from becoming Tommy Jarvis right from the start. The patch will come to the PS4 and Xbox One at a later date.

We have also learned that a report function is being added into the game soon. Right now, the only way to report players for glitching and the sort are to report them through Steam, Xbox Live or PlayStation Network. No timetable has been given for this update. 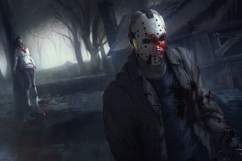 Friday The 13th: The Game: Here Are the Best Perks to Use