According to Eurogamer, Zangoose was exclusive to North America, South America, and Africa while Seviper was exclusive to Europe, Asia, and Australia. However, a Reddit user by the name of nickcholas11 shared a screenshot showing a Seviper caught in Fargo, North Dakota.

Another user by the name of pulsivesilver caught a Zangoose in Australia while user atipongp caught one in Thailand.

User Battlealvin2009 claims that both Pokemon are showing up in Hong Kong.

Here are the other region exclusive Pokemon in the game according to Eurogamer:

Relicanth – Pacific Islands (According to Polygon)

People are also starting to notice that North America-exclusive Tauros is more common in Pokemon Go, according to our report. Back when generation two Pokemon were first introduced, there have been reports that the once plentiful Pokemon could only be encountered rarely if at all. But now players are reporting that spawns have been increasing throughout North America.

The first large scale instance of the area region exclusive Pokemon could be found changing was during the Global Catch Challenge back in November 2017. When players managed to catch over three billion Pokemon globally, Niantic released Asia-exclusive Farfetch’d globally for 48 hours while Kangaskhan became available in Asia.

The region exclusivity of Zangoose and Seviper is possibly a reference to their ongoing rivalry in the main Pokemon games. According to Bulbapedia, Zangoose is based off of mongooses and the Pokemon’s fierce rivalry with Seviper is based off how mongooses are adept at hunting snakes.

During the night of January 3, 2018, weather effects were removed. Niantic later confirmed the issue and shortly after that fixed it. One user claimed that there has been a recurrent outage for players in different areas since the release of weather effects even though that was the first widespread instance of the absence of weather effects. The user said that the outages lasted about a couple of hours at a time and go away as they come without any explanation as to why they happened, and their existence is evidenced by posts every few days on Reddit. 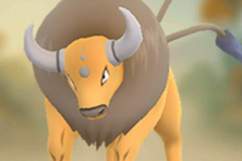 Pokemon Go: Tauros Is More Common After a Long Hiatus