Recently we brought you the tragic story of a stripper who plummeted 15 feet off a balcony while performing an advanced lap-dance move at a Cleveland gentlemen’s club. 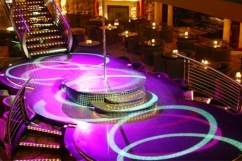 Now, the story gets worse with word that Lauren Block, a 22-year-old dancer at Christie’s Cabaret, has died from her injuries.

Block was giving a lap dance to a client named Pasquale Storino on January 2 when she grabbed the second-floor balcony railing to perform an acrobatic maneuver, then accidentally plummeted 15 feet over the edge and landed on her head, suffering “major head trauma.”

Her face was covered in blood as she lay motionless.

According to police report, cops at first suspected wrongdoing — as two men fled the club immediately after the accident.

He stated that she grabbed the rail, as he was facing away from the balcony, and she tried to complete some sort of dance jump/dance move, and accidentally went head first over the rail.

Block’s family released this statement after her death:

We would like to thank the community for their outpouring of support and prayers for Lauren. She has passed away but is an organ donor, and we hope this will enable her to save many lives and live on through others. We would like to express our gratitude to the staff at MetroHealth. They worked tirelessly to do all they could to save her life. We ask that the media respect our privacy during this difficult time. We know that she’s in God’s hands.