Four dead in Moore near 4th St. and Telephone Rd. Mother and baby included in count. Tried to get in freezer during tornado.

A massive tornado has ripped through the city of Moore, Oklahoma, just outside Oklahoma City — killing dozens of victims including many schoolchildren and causing staggering destruction across some 30 square miles, according to KFOR.

Two elementary schools were flattened, and the town’s only hospital took a direct hit.

Emergency workers are combing through the rubble desperately searching for victims.

KWTV: 3 fatalities at 7-11 in path of storm. Witness says a woman and a small baby were found dead in a car nearby

KFOR meteorologist Mike Morgan called this “the worst tornado damage-wise in the history of the world.”

He is not exaggerating. This is a serious and tragic situation.

Morgan estimates the damage to be two to three times worse than that of the May 1999 tornado — the worst ever — which also hit the town of Moore.

The National Guard has been mobilized and President Obama has directed FEMA to provide “all available assistance.”

The National Guard has been activated in reponse to Oklahoma’s tornadoes. Complete coverage on CNN.com, CNN TV, CNN mobile.

BREAKING: Obama direct FEMA to get “all available assistance” to the Okla. disaster-hit area: yhoo.it/163mJkD

1. This Was Reportedly an EF-4 Tornado

Early estimations classified this tornado as an EF-4 — the second-most-violent tornado on the on the Enhanced Fujita scale, with winds up to 200 mph. 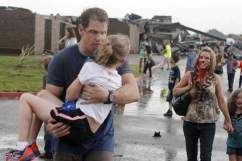 The Most Tragic Photos From the Moore, Oklahoma Tornado

2. The Debris Field of the Tornado Was 2 Miles Wide

The tornado is estimated at 1 mile wide with a debris field of 2 miles. The overall affected area is 25-30 square miles.

:( Moore, OK before and after: twitter.com/WithDrake/stat…

3. The Tornado Ripped Through a Densely Populated Area

Moore is a city of 50,000 people, a suburb of Oklahoma City located just to the south. The tornado came through south of the heart of town, leveling businesses and homes.

The Moore Medical Center, the only hospital in Moore, was hit hard: 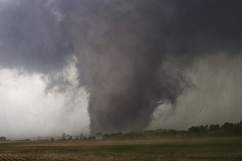 KFOR reporter Lance West broke down in tears as he described the scene at Plaza Towers Elementary School, one of two schools leveled by the tornado. He described a source telling him third-graders were being “pulled” from the school.

The station later reported some two dozen children dead at the school.

Fourth-, fifth- and sixth-grade students were evacuated before the storm. The lower grades were not as fortunate.

But there were some hopeful signs:

Meanwhile, the other school, Briarwood, reportedly sent a message home to parents alerting them that student would remain inside the school to wait out the storm.

Briarwood was reportedly “flattened,” but all Briarwood students are reportedly accounted for, with only minor injuries.

3:37MULTIPLE INJURIES IN Moore.. Briarwood elementary flattened.. people trapped.This thing has been devestating like May 3rd, 1999.

5. Moore Was Struck by One of the Worst Tornadoes of All Time in May 1999

Live coverage below via KFOR:

Loading more stories
wpDiscuz
0
0
Would love your thoughts, please comment.x
()
x
| Reply
The most destructive tornado in history has devastated the city of Moore, Oklahoma — taking dozens of lives including many at an elementary school.