Lil Snupe Shot Deadtranscript: Rising rapper Lil Snupe was allegedly shot dead this morning. He was signed by his label after producer Meek Mill listened to his demo for twenty minutes. Lil Snupe was said to have an original flow and freely talked about his pain. He became a worldwide trend on twitter this morning along with James…2013-06-20T18:28:38.000Z

Rising young rapper Adarren Ross — better known by his pseudonym Lil Snupe — was reportedly shot dead at 4 a.m Thursday morning. According to local news, police say they have a suspect but are not ready to release the identity.

The 18-year-old Louisiana native, dubbed “Freestyle King,” awed rapper Meek Mill with his demo tape and was gaining fierce momentum in the world of music. Lil Snupe was first confirmed dead by his manager, Leem7st, via Twitter on Thursday morning — spurring what can only be described as a social media frenzy.

Before official confirmation of his death hit the news, fans and listeners had already conjured up a Twitter and Instagram storm with messages of grief, confusion and disbelief. Here are the facts you need to know about Lil Snupe, his music and his untimely death.

1. He Was Shot Twice and Killed

Police have told local news that 18-year-old rapper was shot twice in the chest just after 4:00 a.m at an apartment complex he was visiting. According to reports, the shooting happened at a residence called Maplewood Apartments. Although local news published the address as “1901 S. Jones Street in Winnfield, Louisiana”,  other sources list the Winnfield’s Maplewood Apartment‘s address as “1701 S. Jones St.” Police say they do have a suspect, but are not yet ready to release the name. Reports from the ground indicate that the crime scene has now turned into a memorial decorated with flowers and balloons.

Producer, DJ Smallz spoke exclusively to AllHipHop about his reaction to the news and revealed that the two met up recently to plan for Snupe’s mixtape:

I couldnt believe the news I heard this morning when I got that text as soon as I woke up. It was crazy, I was just with snupe this past Sunday in Dallas, TX and we had discussed me hosting his upcoming project, ”RNIC 2″. We went over the cover art, shot some viral, talked about the features he wanted and everything. The fact that he had just turned 18 less than a week ago was crazy. Snupe had so much potential and not only in his lyrics and his drive but also the emotion and pain in his voice. You can’t buy that. That was in him. That sh*t was real. S.I.P. Smoke In Peace bro. You were taken too soon and the game needed you.

The last tweet the Lil Snupe sent out to his fans before he was reported dead was an homage to his hometown.

2. He Got Signed to a Record Label 20 Minutes After Handing Off His Demo

After he went to a Meek Mill concert in Louisiana, the teenage rapper handed off his demo tape (featured above) .”He [Meek Mill] was in a van, they was gonna pull off. And I went and knocked on the van, on the window. They let the window down, grabbed the mixtape and it was like 10 minutes later, 20 minutes later they called me,” Snupe told MTV in April. Mill, after listening to the mixtape for only 20 minutes immediately signed him onto his label, Dream Chaser.

Before the teenager’s death was officially confirmed, Meek Mill sent out an urging tweet for Lil Snupe to contact him:

3. He Was a Rising Star With an Original Style

Lil Snupe – MeloDream Chasers own Lil Snupe drops the first video off his RNIC mixtape "Melo" Keep your eyes on this rising star from Louisiana. Directed By: David Ricks2013-04-23T16:41:19.000Z

He was spittin’ so much pain, he’s from the south with a flow like an east coast guy. Like with that bounce flow, all over the place, he really can spit, and he was talking that talk that I can really relate to. I seen potential in him.

In a tragically ironic turn of events, Lil Snupe’s lyrics to his song “Nobody Does It Better” contradicted his fate:

Niggas they wanna blaze me
I hate it because I made it,
All I took is dedication and some motivation,
They say ..over night, I was being patient,
I’m thuggin every night, niggas tryin to take my life
House to gettin it’s illegal money like this shit is right
I gotta get it, ‘cause I’m trying to get fool rich
And I refuse to let my mama lose me to some bullshit.

Once news of Lil Snupe’s death hit the internet, fans took to twitter to send out their condolences. The hashtag #RIPLIlSnupe rose up on the twitter charts and became a world wide trend, along with ‘James Gandolfini’, the HBO star that passed away the day before.

Fans have also taken to Vine to send messages of grief. Many of these video tweets are accompanied with the sentence: “Lil Snupe and Vine died today.” This is most likely linked to the fact that Facebook’s Instagram has added video to its photo application, creating heavy competition with Twitter’s Vine video application. 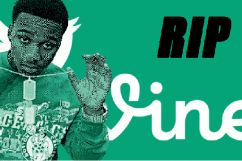 SUPERTREND: #RipVine and #RipLilSnupe Trend Together, Then Merge

5. He Was Allegedly Killed By Someone He Knew

The young star is believed to have been killed by someone he knew. Police confirm that he was killed inside an apartment he was visiting. Police have not confirmed the identity of the suspect. Speculation on Twitter claims that the photo below is the last known image of the rapper before he was shot. Other buzzing rumors claim that the other man in the forefront of the photo is his killer.

Photos of a bloody body have surfaced on twitter, alleging to be of the deceased rapper.