A judge acquitted Army Pfc. Bradley Manning, 25, of aiding the enemy during a court ruling on Tuesday, but found him guilty of 17 other charges against him after leaking confidential military documents for the world to see.

1. Bradley Manning Was Acquitted of Aiding the Enemy

Bradley Manning avoided life in prison and was acquitted of aiding the enemy after leaking over 250,000 classified documents to the controversial whistleblower-site, Wikileaks, reports The New York Times. The judge in the court-martial, Col. Denise R. Lind, rejected the government’s notion that an employee who leaks national information to a website that publishes it for the world to see is guilty of aiding the enemy, even if it’s true that enemies like Al Qaeda may get their hands on it.

2. He Was Convicted of Multiple Other Counts

Bradley Manning found not guilty of aiding the enemy, guilty of most other charges. http://t.co/hed09WZzLQ

Manning was, however, convicted of 17 other charges out of the 22 counts against him, including six espionage counts, five theft charges, a computer fraud charge and other military infractions.

Bradley Manning Verdict Revealed: Guilty But Not of Aiding the Enemy

3. Manning Did Not React to the Verdict

Manning is escorted by military police as he leaves his military trial. (Getty Images)

Manning reportedly did not appear to react to the verdict, although his attorney, David Coombs, smiled when it was announced that he was not guilty of aiding the enemy.

“We won the battle, now we need to go win the war,” Coombs said outside the courtroom after the verdict Wednesday. “Today is a good day, but Bradley is by no means out of the fire.”

Although Manning was acquitted of the most serious charge, he still faces a hefty prison sentence. He faces 20 years for the charges that he pleaded guilty for, as well as the sentences for the original eight federal Espionage Act violations, five federal theft counts, and two federal Computer Fraud and Abuse Act violations. They are each punishable by up to 10 years. He also faces prison time for the five military counts of violating a lawful general regulation, punishable by up to two years each. All in all, he faces a maximum sentence of 136 years in prison.

5. His Sentencing Hearing is Set to Begin Wednesday

His punishment for the charges against him will be announced Wednesday morning at a sentencing hearing beginning at 9:30 a.m.

Leak this story to your friends!

6. He Pleaded Guilty Earlier This Year

Earlier this year at the beginning of the trial, Manning pleaded guilty to some of the lesser counts against him. With a reportedly calm and collected demeanor, he acknowledged that what he did was illegal and breached numerous military rules, but denied doing anything that qualified as espionage. He argued that leaking the documents was the morally correct thing to do after discovering widespread corruption in the military.

During the trial, prosecutors argued that Manning had a “general evil intent” in leaking the documents because he knew the classified material would be seen by and help terrorists. They claimed that when Navy SEALs raided Osama bin Laden’s compound in 2011, they found copies of the documents he provided to Wikileaks.

8. He Said He Wanted to Expose the American Military

In a pre-trial hearing, Manning said he wanted to expose what he called the American military’s “bloodlust” and disregard for human life in Iraq and Afghanistan, as well as its dishonest diplomacy. He said that he carefully selected documents that wouldn’t put troops in harms’ way. His attorney tried to portray Manning as a whistleblower with good intentions.

9. Reactions to the Verdict Have Been Mainly Positive

“Manning’s Conviction: Bradley Manning was rightly convicted, but his case is still troubling.” by @joshuafoust https://t.co/L6u987o9Gb

Reactions out of Washington D.C. have mainly been positive since the verdict was read. Members of the House Intelligence Committee, Rep. Mike Rogers and Rep. Dutch Ruppersberger, released a joint statement hailing the convictions.

“Justice has been served today,” the statement said. “PFC Manning harmed our national security, violated the public’s trust, and now stands convicted of multiple serious crimes. There is still much work to be done to reduce the ability of criminals like Bradley Manning and Edward Snowden to harm our national security.”

"WikiLeaks will not rest until Bradley Manning is free." http://t.co/I8hlQJhukm 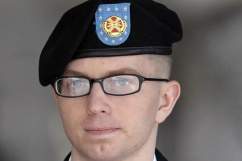