A Fourth of July celebration ended badly after a firework show in Simi Valley went haywire and began shooting fireworks out into the crowd and injuring over two dozen people. Here’s what you need to know.

1. It Happened in Simi Valley, California

2. Fireworks Shot Into the Crowd

Police said that fireworks accidentally detonated during the show and shot out into the crowd. Witnesses report that the fireworks that initially went up were very low to the ground and the rest of fireworks exploded at once.

“There was a big boom,” said witness Justice Allen, 17. “Everybody started running down the street. People were screaming. Everybody was just terrified. People hid in bushes.”

Allen added that fireworks started flying over the fences and sparks passed by her and her friend.

Another witness, Annisa Wynn, told KTLA-TV Channel 5 that the explosion occurred about two minutes into the show. the fireworks shot out into the crowd along the ground instead of up in the air, she said.

“The fireworks were so close, you could see them on the ground,” Wynn said. “It never happens this way. People were screaming.”

A total of 28 people were injured in the Fourth of July celebration-gone-wrong, and fortunately, no fatalities. Most of the injuries were described as shrapnel-like injuries or burns. Four people were taken to the hospital with moderate to severe injuries and 16 with minor injuries. The rest were treated and released at the scene. 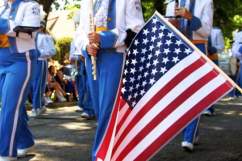 4. The Park Was Evacuated

The show was cut short after the incident and authorities and quickly evacuated the park after the blast.

Authorities estimated between 8,000 and 10,000 people in the crowd watching the show. 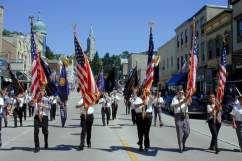