In a strange twist, suspected murderer and kidnapper James Lee DiMaggio made Hannah Anderson’s grandmother the beneficiary of his life insurance policy.

Bernice Anderson is the grandmother of Hannah Anderson, the girl DiMaggio reportedly held captive for over a week. DiMaggio is also the suspected murderer of Hannah’s mother and brother, whose bodies were found in his burned-down house on Sunday, August 4.

Hannah is currently living with Bernice, which has led many to assume the $112,000 was left for Hannah’s benefit. The policy is provided by The Scripps Research Institute, DiMaggio’s most recent place of employment.

This revelation opens up a whole new wave of questions about the murders of Christina and Ethan Anderson, and the kidnapping of Hannah Anderson. When did DiMaggio make Bernice Anderson the beneficiary? If DiMaggio really intended for the money to benefit Hannah, did he know that Hannah’s mother would be dead when he made Bernice the beneficiary? 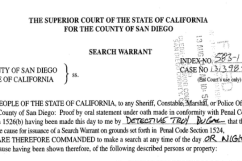