Sergio Consuegra, 52, is the man who braved the vicious gang of marauding bikers who were intent on attacking Alexian Lien, his wife and their infant daughter, and possibly saved the lives of the young family, reports CBS New York.

On September 29, while driving on Manhattan’s Henry Hudson Parkway, Alexian Lien, his wife Rosalyn Ng, and their 2-year-old daughter were accosted by a group of bikers. The bikers, named The Hollywood Stuntz, intimidated the family to such an extent that Lien panicked and drove through a group of the bikers, gravely injuring one, Edwin Mieses, who now lies in a medically induced coma.

1. He Made Himself Into a Human Shield

Consuegra was on his way to church in the Washington Heights neighborhood of Manhattan when he saw the bikers approach. He told the bikers to leave Lien alone, when they didn’t he physically covered the 31-year-old with his own body, creating a human shield.

2. He Thought the Bikers Wanted to Kill Lien and His Family

Consuegra told reporters he could see in the bikers eyes that they wanted to kill someone. He added that there were two others who helped him save Lien and his family. 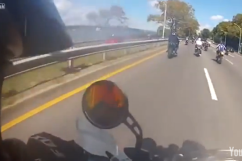 3. Consuegra’s Heroism Was Honored by the City

At a small ceremony today in Washington Heights, Sergio Consuegra was honored by the city. City Councilman Robert Jackson said: “On behalf of the entire city, we thank you.” Consuegra had wished to remain anonymous until friends of his recognized him from the CCTV footage of the incident that was released by the NYPD, after alerting the media, Consuegra had no choice but to accept his plaudits. 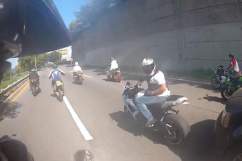 Let me not show these people that I’m here to engage in any kind of confrontation but that I’m here to protect the man and the family, so I’m going to keep it cool…I do not call myself a hero, because I wish I could have done more.

5. Consuegra Stepped in While an NYPD Officer Stood and Watched

An NYPD officer who was with the gang, stood back and did nothing as bikers attacked Alexian Lien and his family. The officer, who works undercover, has been suspended pending a fully investigation.