Sounds like Assembly Hall was not very well… assembled 8/10

A piece of metal fell from the ceiling and into the seats at Assembly Hall, forcing the cancellation of Tuesday’s nationally televised basketball game between Indiana and Iowa in Bloomington.

While it’s fun to have a chuckle at the irony of the situation, it’s very fortunate that the arena wasn’t full when it happened because someone could have been seriously injured.

According to the Indy Star, an ESPN crew was working inside the arena at the time of the incident.

WISH-TV in Indianapolis covered the story.

IU athletic director Fred Glass told ESPN that the situation is being investigated by both university officials and outside engineers.

It’s pretty speculative at this point, but they think it’s probably a weather-related issue that forced that plate out. We’re going to work around the clock to evaluate the problem, fix the problem. We think we’ll have a good evaluation by the engineer as early as mid-day (Wednesday).”

The vine video above shows what looks to be a a metal beam fall from the rafters and into some seats behind the basket.

The game, which was slated for a 9 p.m. tip-off on ESPN, has not yet been re-scheduled. Georgia at Tennessee will be aired instead. 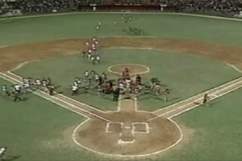