Often referred to as the “Forgotten Genius,” Percy L. Julian was a renowned chemist who lived between 1899 and 1975. Julian made incredible and invaluable strides in the field of medical research and prescription drug creation. On Friday March 11, his birthday was recognized by Google in the form of a doodle.

1. His Grandfather Grew up In Slavery

Percy Lavon Julian was born in 1899 and would become the oldest of 6 children born to Montgomery, Alabama, natives James Sumner Julian and Elizabeth Lena Julian. While both of his parents were graduates of Alabama State University, they worked hard to be able to get an education. Percy’s grandfather, James’ father, had been a slave in Alabama.

2. He Was One of the First African Africans to Receive a PhD in Chemistry

From his Alabama up bringing, Julian studied at DePauw University in Greencastle, Indiana where he graduated as valedictorian. After be brief time teaching chemistry at a traditionally black college in Tennessee, Julian began working on his Masters Degree, which he finished at Harvard University in 1923. Ultimately, Julian received his PhD while in Vienna, Austria, and returned home to the United States with a newfound desire and interest in plants and the chemicals they contain.

After Julian became captivated by the chemical possibilities of the Soy bean, he began using his experiments to create synthetic cortisone, a rare compound that helped relieve the crippling symptoms of rheumatoid arthritis. By doing this he reduced the cost of cortisone from hundreds of dollars to just a few cents.

4. He Battled Against Racism His Whole Life

By 1950 his work was so influential and helpful that he was named Chicagoan of the Year by the city of Chicago, an honor that enraged racists across the city. That year his house was set on fire on Thanksgiving day, and the next year dynamite was thrown at his house.

His adult life was not the first time he encountered the violence inherent in racism. A number of accounts explain how Julian, as a young boy in Alabama, came across a lynched man hanging from a tree in the woods near his house.

5. Google Honored His 115th Birthday With a Doodle

Google is continuing its effort to use its Google to celebrate the lives of people who’s lives and accomplishments were overlooked due to their race, gender, or sexuality. You can see Julian’s doodle above. 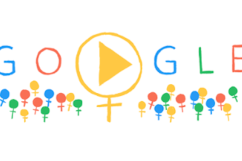 Loading more stories
wpDiscuz
0
0
Would love your thoughts, please comment.x
()
x
| Reply
A Google doodle marks the 115th birthday of Percy Julian, a chemist behind hormone research like the production of testosterone and birth control.