Lee Silverman is being hailed as a hero after cops say the psychiatrist took out a gun he was carrying and shot Richard Plotts, a psychiatric patient who had opened fire inside a Pennsylvania hospital and killed a case worker. The female victim allegedly killed by Plotts has been named as 53-year-old Theresa Hunt. According to her Facebook page, she was a Blended Case Manager at Mercy Fitzgerald Hospital and lived in Philadelphia.

1. Cops Say Silverman Was Shot in the Head, but Returned Fire & Shot the Suspect

Cops told Philly.com that Silverman was among the people shot when Plotts opened fire inside the psychiatric wellness center at Mercy Fitzgerald Hospital in the Philadelphia suburb of Darby.

Despite a bullet grazing Silverman’s temple, the doctor was able to return fire, wounding Plotts and preventing the shooter from continuing shooting.

2. Caseworker Theresa Hunt Was Killed in the Attack

Theresa Hunt, a 53-year-old case worker, was killed in the attack after an argument began during a meeting between Plotts, Hunt and Silverman, cops said.

According to the Philadelphia Daily News, a staffer at the psychiatric center called cops after the staffer saw Plotts pointing a gun at Silverman’s head. Shots rang out moments later, and Hunt was killed in the attack.

The paper reported that two other staffers entered the office and wrestled Plotts to the ground and disarmed him.

When cops responded, they found Plotts with two wounds in his torso and one in his arm, the Daily News reported. Plotts was charged with first and third degree murder of Theresa Hunt, as well as an attempted murder charge for the attack on Silverman.

3. Silverman Acted Quickly While ‘Realizing it Was a Life or Death Situation’

Delaware County District Attorney Jack Whelan said Silverman acted rapidly after Hunt was shot, realizing he was in grave danger. Here’s how Whelan described the exchange, according to the Delaware County Times:

When the caseworker was shot, (Silverman) crouched down behind the desk to avoid him being shot,” Whelan said. “He was able to reach for his weapon, and realizing it was a life or death situation, was able to engage the defendant in the exchange of gunfire.

According to the Delaware County Times, Whelan told reporters investigators are looking into Silverman’s relationship with Plotts.

We do believe that there were some issues between the doctor and the patient, but whether or not he actually feared him is unclear.

4. The Chief Said if it Wasn’t for Silverman, the Shooter Might Have ‘Walked Down the Offices Until He Ran out of Ammunition’

“Without that firearm, this guy could have went out in the hallway and just walked down the offices until he ran out of ammunition,” he told the paper.

5. Plotts Is in Critical Condition, but Silverman Is Expected to Make a Full Recovery

After being shot three times, Plotts is in critical condition in hospital. Philly.com reports that Plotts was shot twice in the torso and once in the arm. The doctor who shot Plotts is a 52-year-old psychiatrist at the hospital.

Despite also being wounded in the attack, the doctor is expected to make a full recovery. According to Health Grades, Silverman is a graduate of Thomas Jefferson University’s medical school in Philadelphia. 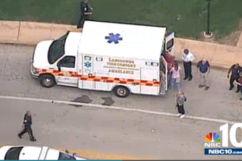 Loading more stories
wpDiscuz
11
0
Would love your thoughts, please comment.x
()
x
| Reply
Dr. Lee Silverman is being hailed as a hero after shooting a gunman who had shot several people in a Pennsylvania hospital, saving countless lives.