First there was Sarah Palin, then Michele Bachmann, and now there is Louisiana State representative and Congressional candidate Lenar Whitney.

With a face and hair like a Long Island Medium and a reputation of being “one of the most conservative” politicians in Louisiana, Lenar Whitney will certainly be a thorn in the side of both parties.

1. She Says Climate Change Is an Elaborate Hoax

One of the most notable and publicized tenets of Whitney’s platform is that climate change, or “global warming,” is one of the most elaborate hoaxes in human history. In her campaign video above, which has been viewed more than 83,000 times, Whitney says that any 10-year-old could disprove climate change with a simple household thermometer, despite the consensus of the scientific community.

2. She Said Obama Is Too Busy ‘Drinking Beer & Playing Pool’ to Handle Immigration

In a baffling campaign video, Whitney explores the nuances of immigration policy by simply discussing how to deport all “11 million illegal immigrants.” One of the most interesting moments of the video comes 15 seconds in when Whitney claims President Obama is spending too much time “drinking beer and shooting pool” to address the problem.

Whitney believes that if the United States could “shut down the border between North and South Korea,” then it should be possible to do that between the United States and Mexico. She does not mention that there are 1.2 million land mines around that border, which kill an estimated 1,000 civilians a year by accident.

3. She Recently Fled an Interview

What @CookPolitical printed about me is an outright lie. I left interview w/ @Redistrict several ?s later, after he asked if I was a birther

Whitney was recently thrust into the national public spotlight after being interviewed by David Wasserman for the Cool Political Report. Wasserman has interviewed more than 700 congressional hopefuls, and in his words Whitney was the “most frightening candidate I’ve met in seven years.”

In a column for the Washington Post, Wasserman wrote that Whitney “froze” when he asked her to name a scientific report that backed up her ideas on climate change. Then, when he asked her about the manufactured Obama birth certificate controversy, she was reportedly “whisked” from the room by her campaign consultants.

In the tweet shown above, Whitney combats Wasserman’s telling of the situation.

4. She Opposes Medicaid Expansion & Has a Concealed Carry Permit

Some of the other issues Whitney has spoken out on have been the expansion of Medicaid under the Affordable Care Act and gun control. In the video above, she clarifies her stance in opposition of Medicaid expansion by saying that the expansion doesn’t insure children, only more adults, perhaps not realizing the legislation now allows children to stay on their parents’ insurance plan until they’re 26.

She’s a gun-carrying member of the NRA and vocal opponent of any gun control legislation, saying on her website that she will “never vote to expand federal gun laws. Period.”

I have a concealed carry permit. I'm a lifetime NRA member. I do everything I can in the LA House to reduce gun regulations. #DontTreadOnMe

5. She Owned a Dance School for Over 30 Years 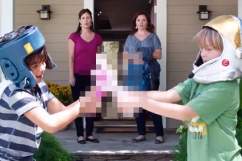