As part of Argentina’s national soccer team, Ezequiel Lavezzi takes on the Netherlands in the World Cup semifinals.

His doting girlfriend, Yanina Screpante, will surely be cheering on her man, who has became a fan favorite among the ladies watching.

Let’s learn more about the woman who has the soccer star’s heart.

Lavezzi, 29, has been with the model, whose video photo shoot we see above, for four years.

In an interview, she said that they haven’t made plans yet to be married and have children, and just want to enjoy each other’s company for the time being.

2. She Dated a Pro Tennis Player

She was once together with another pro athlete, Argentine tennis player Juan Martin del Potro.

They started dating after meeting at a club in Buenos Aires.

Lavezzi’s son, Tomas, lives in Argentina with his mother, who split from Lavezzi.

As we see from the tweet above, Screpante likes spending time with him.

Lavezzi told the Express, “According to the agreement we have, I can see him three times a year, plus the times I go back to Argentina.”

4. She Was Mugged at Gunpoint in Naples & Called the City ‘Sh*t’

She was mugged of her Rolex at gunpoint in Naples, where her boyfriend played at one point.

She started a Twitter rant where she threatened to leave the city and take Lavezzi with her.

Her infuriated tweets included these statements:

When they say that in Argentina there is insecurity … the city of Naples is sh*t.

I have had my watch stolen at gunpoint. If this happens to me again Iâ€™ll take Pocho [Lavezzi] away from here

The president of Naples, Aurelio de Laurentiis, responded by saying:

Certain comments in the heat of the moment came from the heightened emotion. I would like to tell Yanina that during a recession she shouldn’t go round with a Rolex on her wrist.

He added, “Perhaps the girl thought she was untouchable, being Lavezzi’€™s girlfriend, but that is not the case. In any case, Naples is a marvelous city and the people are generous.” 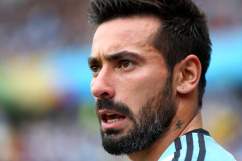