A 17-year-old girl was shot dead by three cops inside the lobby of the Longview Police Department in Texas. The tragic shooting happened on January 22. According to police, Kristiana Coignard was “brandishing a weapon.” That weapon was later revealed to be a butcher knife.

1. Cops Say Coignard Had ‘I Have a Gun’ Written on Her Hand

According to a press briefing given by the Longview Police department on January 28, the officers who shot Coignard believed she had a gun after she wrote “I have a gun” on her hand. The Longview News Journal reports that the butcher knife that Coignard had with her was 13 inches in length. You can watch the video of this terrible incident above. The 23-minute long clip shows Coignard entering the station where she picks up a phone at the front desk to ask for help. Police say that she didn’t elaborate on what kind of help she needed. Eventually she is confronted by Officer Glenn Derr. After speaking to her for a while you can see him wrestle her to the ground. He backs away and Coignard stands back up.

Two other officers then enter, Gene Duffie and Grace Bagley. At 11 minutes into the video you can see officers Derr and Bagley shoot Coignard three and two times respectively after Coignard tries to run away. Prior to the shooting, Officer Duffie tried to tase Coignard, but it had no impact on her.

The Marshall News Messenger in Texas reports that Coignard was shot “multiple times.” The shooting is being investigated by Texas Rangers. The paper reports Coignard had been living in Longview, Texas, with her aunt, Heather Robertson. After the shooting, Coignard was rushed to Good Shepherd Medical Center, where she was pronounced dead. A statement on the Longview Police Facebook page read:

On January 22, 2015 at 6:28 p.m., Longview Police were dispatched to the front lobby of the Police Department for an Unknown Problem. When Officers arrived they were confronted by a white female who threatened them. The suspect brandished a weapon, made threatening movements toward the officers and was shot. The suspect was transported to Good Shepherd Medical Center where she were pronounced dead by a Justice of the Peace. The Texas Rangers have been called in to investigate this shooting.

The next major update from police on the incident read:

LPD would like to remind everyone to please be aware of the rules of our page. We appreciate that everyone has an opinion and don’t discourage you from sharing on this page. However, this is not a page to bash others, their education, or life experiences.

Once the investigation is complete the Texas Rangers and/or the Gregg County District Attorney will release further information about this incident and then everyone will be able to have the information available to make a decision that can be more accurate than what they would be able to make based on the limited information furnished at this time.

Due to the ongoing investigation it is not possible to release all the information because that could jeopardize the integrity of the investigation as it goes forward.

Thank you in advance for your patience and cooperation in observing the rules of our page.

In an interview with Think Progress, Coignard’s aunt said, “I think it was a cry for help. I think they could have done something. They are grown men. I think there is something they are not telling us.” Robertson said her niece suffered from bipolar disorder and her niece’s mother died when Coignard was 4. According to Robertson, Coignard had attempted suicide on numerous occasions. In one attempt she drank toilet bowl cleaner.

3. The Cops in the Shooting Have Been Placed on Leave

The Longview News-Journal reports that the officers in the shooting have been placed on leave. Longview Mayor Jay Dean was the first to tell the News Journal that Coignard had been “wielding a knife” after entering the police department.

Coignard posted this meme to her Facebook page on January 12.

Coignard’s Facebook page reveals little information about Goignard. Her last post, on January 12, shows a young boy and girl seemingly about to walk into another dimension. On October 28, she posted a meme that read, “We are in this world, but not of it.” The two groups she was a member of are “Extra-Terrestrial Races & Civilizations” and “Exopolitics Group.”

5. This Is the Third Controversial Shooting Involving the Longview Police in 6 Months

In 2014, the Longview Police Department were involved in two fatal, controversial shootings. In August 2014, 23-year-old Regan Marshall Wagner was shot dead after being pulled over by Longview cops. It was initially reported that Wagner was killed in an “exchange of gunfire.” It later emerged that Wagner hadn’t fired any shots. Wagner had gun but it wasn’t loaded. Then, in October 2014, Justin Michael Aguilar, 15, was shot dead by Longview cops after an attempted armed robbery at a gas station, reports KETK. 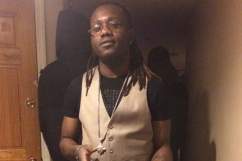