Two former Queens roommates are accused of plotting to plant a bomb in New York City. The feds say both are ISIS supporters. They’ve been named as Noelle Velentzas, 28, and Asia Siddiqui, 31.

1. Siddiqui Told an FBI Agent That She Was Learning How to Build a Bomb

According to a federal criminal complaint, Velentzas and Siddiqui thought they were dealing with a fellow ISIS supporter but were actually talking to an FBI agent. Recently, Siddiqui told the undercover agent that she didn’t want to continue talking about how her terrorism plotting was going anymore. She allegedly previously told him that she was learning how to build a bomb. The documents say that the two expressed ideas about planting a bomb in New York City’s Herald Square, but it’s not clear how far that plan ever got. According to the feds, the public were never in danger. Both of the suspects are U.S. citizens and although they no longer live together, the pair both lived in the Jamaica, Queens, neighborhood at the time of their arrest.

At the Queens home of Asia Siddiqui, who is accused of plotting propane bombs and declaring jihad for al Qaeda. pic.twitter.com/AIgxQCx1XS

2. They Wanted to Be ‘Bad B*tches’ & Bomb the Funeral of Officer Rafael Ramos 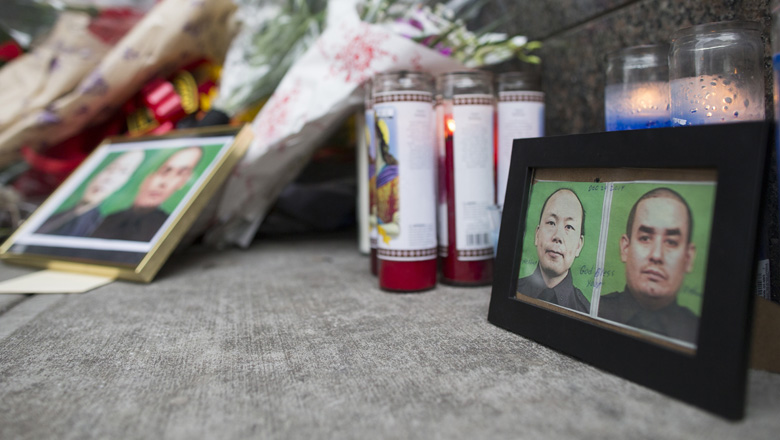 In the documents, during one meeting between the FBI undercover agent and the two suspects, the pair mooted the possibility at planting a bomb at the December funeral of Officer Rafael Ramos. He was shot and killed in his patrol car by madman attacker Ismaaiyl Brinsley on December 20 in Brooklyn, New York. Ramos, 40, was with the force for just two years when he died. He had just turned 40 on December 12. The two wondered how many cops would be there.

Prior to that aborted plot, the suspects had been working on hand-to-hand combat. The agent observed and incident where Velentzas pulled a knife out of her bra and made a stabbing motion before adding “Why we can’t be some real bad bitches?”

The two suspects were influenced by Tamerlan and Dzhokhar Tsarnaev. (Getty)

The suspects were first named by the New York Times. The criminal complaint against the women reads that Siddiqui was “in possession of multiple propane gas tanks, as well as instructions for how to transform propane tanks into explosive devices.” Documents say that the two had been “researching pressure cookers since those devices were used in the Boston Marathon bombings in 2014.” Velentzas told the undercover FBI agent that she needed to learn how to “fight multiple people at once.” She adds, “If we get arrested, the police will point their guns at us from the back maybe from the front. If we can get even one of their weapons, we can shoot them. They will probably kill us but we will be martyrs automatically and receive Allah’s blessings.” The documents also detail the extensive lengths that the two and the undercover agent went through to learn how to make a bomb from domestic utilities, their fear of not making the bomb correctly and many trips they made to Home Depot to get materials.

3. Asia Siddiqui Was Close With the Editor of Inspire Magazine

A profile for Asia Siddiqui on the freelance designer website Coroflot.

The documents state that Asia Siddiqui “became close” with Samir Khan in 2006, while he was living in the U.S. After leaving the country, Khan became the editor of Inspire magazine, the al-Qaeda magazine. He was killed in 2011 drone strike in Yemen. Despite Khan’s death, Siddiqui maintained ties to Al-Qaeda in Yemen. In 2009, she had a poem published in Inspire’s predecessor called “Take Me to the Lands Where the Eyes Are Cooled.” Here it is in full:

Take me to the lands where the eyes are cooled…

There are dreams I will leave everything behind for

Everything that has meaning in my life

Came to life with the introduction to my Lord

To the Oneness of my Lord

To the Mercies of His evermore

Than I can implore…

Memories of battlegrounds I haven’t yet stepped on

Memories of battlefields I have never stepped on…

Take me… to the lands where the eyes are cooled

I remind myself these sacrifies are only for You, too few

Hunger never felt so good as it does handcuffed

Some of us are born soldiers, battle runs through our blood

The sound of gun rattle sends a rush, soothing

I sleep with my eyes open, my subconscious constantly invoking

Al-Baa’ith! Al-Mu’eed! … my mind strays back to golden past I haven’t yet lived…

All this Time I spent living Wahn dreams instead

Surrounded by walls of marble with widescreens, gardens of plush green

But Allaahi, nafsi only knew of empty feelings

Verily, time teases. The tease of martyrdom when the ruh leaves

In degrees; the degrees every soul dreams to seize

The degrees the angels appease one over another

The degrees of infinite seas with which the Lord pleads, the seven seas cannot encumber

I drown in ghibtah rage for a cavalry of my own

Plotting against shaytaan, suffocating for self-control

I want to be purified with every breath, every sweat, every echo, every harakah

The innumerable Tawaafs, the countless du’at, every step I take, I’m back at Arafat

I have work to do. Mistakes to correct, time to make up.

This world is a morgue on standstill watching the lost souls

Finding no place to call home, my vision blurs

All my fingers plucked out, my veins stretched to dull

Laughter poking into my sleep… into my dreams

The urges reincarnate into rebellion, into physical hunger, social incompetency

I am a slithering soul cringing to be free

The sweat of my efforts choke, wet strokes of vapour from a cloud

For my dreams to emerge… on cracked canvas – chipping off paint

The pigments of a lost nation. A curse. A nation. A religion. A pagan

An exiled. A misery. A child with incisors. A soliciting child

Soliciting for a while for golden signs… along the Cyprus, Nile, miles from

With a defied conscience eager for recompense…

The mountains are my castles, the sand is my sea

I hear voices in the dark; feel pressure on my prayer rug

As I swing on a hammock between date palms, I drop bombs

My teeth grind, my gums sting, my jaws flinch from and flame in chemical pain

And from all this. I confess I’ve become more sane

My backbones sprain from the tensions of unresolved game

I refuse to return home! Thrust open my wounds where my nerves have ruined

Rupture my skin where my membranes bare thinned

Tear my limbs that resist in abstinence

Here- taste the Truth through fists and slit throats –

And prefer this over death from slit wrists, pills, drunk and doped

Thank me later, for now, do what you will – let the noise persist!

Running in half excitement, half regret, index finger to sky, a bulletproof vest

I turn around – what can my enemies do to me if Allaah has promised me success?

I waken with moistened eyes, tired and high off of unresolved life

Asia Siddiqui also wrote a letter of support to Oregon would-be terrorist Mohamed Osman Mohamud. The return address on that 2010 letter was for York College in Jamaica, Queens (above), Siddiqui’s alma-mater.

4. Velentzas, a Married Mother, Had a Bin Laden Pic as Her Phone’s Wallpaper

Velentzas espoused that Osama Bin Laden was her hero and what’s described as “violent jihadist ideology,” according to documents. The undercover agent who was dealing with Velentzas said that the wallpaper background on her phone was of the 9/11 mastermind holding an AK-47. She also thought of Abdullah Azzam, a founding member of al-Qaeda, as an icon. Velentzas told the undercover agent “a suicide bomber does not take her life; she gives her life in the name of Allah.” The New York Daily News reports that Velentzas is a married mother of one child.

5. This Comes a Week After a Member of the U.S. National Guard Was Arrested for Allegedly Trying to Join ISIS

This comes a week after the arrest of two cousins in Chicago who were trying to join ISIS. One of those men, Hasan Edmonds, was a member of the U.S. National Guard.