A hammer-wielding man with a history of mental illness suspected of randomly attacking four pedestrians in Manhattan was shot Wednesday morning in Midtown during a confrontation with two NYPD officers who recognized him from surveillance photos.

An officer shot the man after he swung the hammer at the officer’s partner, the NYPD says. The man has been identified by the New York Post as 30-year-old David Baril.

The shooting happened at about 10 a.m. on 8th Avenue near 37th Street.

1. He Posted Ominous Poems About Death & Demons On Social Media

Baril writes about committing murder, violence against women and “doing what was done out in Columbine.”

About a year ago, he posted a drawing of a bloody hammer:

David Baril posted this drawing of a hammer about a year before his alleged attacks on random pedestrians. (Instagram)

See some of his darkest writings here.

In a screenshot of an about the author page in a book of his poetry, Baril says was born in Brooklyn in July 1984 and spent his early childhood years in Haiti. He returned to the United States in 1989, moving to Riverdale in the Bronx. He says he is still a Bronx resident. He says he is a poet and a skateboarder and many of his Instagram photos and videos show him riding his skateboard in New York City.

After mentioning the many schools in New York he attended in middle and high school, and the trips he’s taken to several states since then, Baril writes, “P.S. drugs fucked up my brain…”

Baril posted on his Facebook page earlier this year that he is a student at the Borough of Manhattan Community College.

2. Baril Is in ‘Extremely Critical Condition’ After Being Shot Twice

David Baril, suspected in random attacks on pedestrians in Manhattan with a hammer, was shot by NYPD officers. (NYPD surveillance photo)

NBC New York initially reported that Baril had died, but now the news station reports that he is in “extremely critical condition,” at a hospital.

The officers recognized him from a surveillance photo that had been distributed from one of the hammer attacks, according to the New York Post.

Baril took out the hammer and swung the claw end of the tool at Officer Lauren O’Rourke, according to the Post. Her partner, Officer Geraldo Casaigne, pulled his gun and shot Baril in the torso and right arm. The officer fired four times, police Commissioner Bill Bratton said at a news conference. Baril was hit twice. Bratton said Casiagne possibly saved his partner’s life.

The entire incident was caught on a nearby surveillance video camera, and the footage was released by police. See it here.

The hammer used in the attack. (Getty)

“There was a guy with a hammer. He tried to hit the female officer. He was standing behind her and tried to hit her,” Maurice McFadden, a witness, told DNAInfo.

“He was just going after her like that. She was dodging, trying to avoid him, so the other cop that was with her shot him,” McFadden said. “It all went by so fast.”

A woman who was walking in the area when the shooting happened said on Instagram she heard the shots.

“I looked up and said “that wasn’t real was it?” Then I ran cuz it was real, a few feet from me a man was on the ground with a hammer in front of him. The cops had shot and caught The Hammer Guy,” she said.

Police said both of the officers were hospitalized to be evaluated. O’Rourke suffered abrasions and lacerations to the back of her head. Casaigne was suffering from tinnitus. They were treated and released.

Baril was taken by ambulance to Bellevue Hospital and was undergoing surgery there. 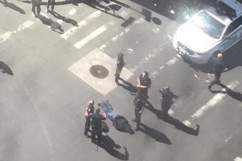 3. Baril Is Suspected in 3 Hammer Attacks on Pedestrians

David Baril was shot by a NYPD officer in Midtown Manhattan. He was suspected in several attacks with a hammer on pedestrians. (Twitter/@MJ__fadeaway)

The 30-year-old man was wanted in connection with four random attacks on pedestrians, according to the New York Post.

The NYPD says the first attack happened Monday at about 1:45 p.m. at 6th Avenue and West 35th Street. A 20-year-old man was hit in the back of the head with a hammer, leaving him bloody, but otherwise OK.

In the second attack, at about 7:30 p.m. Monday, a 28-year-old woman was hit in the head with a hammer in Union Square. She said she was sitting on a park bench when a man she didn’t know took a hammer out of a bag and struck her in the head. She was taken to the hospital in stable condition.

Crime scene investigators examine a hammer that police say Baril swung at an officer before he was shot. (Getty)

About 10 minutes later, a 33-year-old woman walking on West 17th Street was hit in the back of the head by the hammer-wielding suspect, causing a scalp injury, police said. She was also taken to the hospital in stable condition. Both victims were released after receiving treatment.

He is also suspected in a fourth attack, where police say he punched a 34-year-old woman in the head on East 26th Street near Madison Avenue at about 5 p.m. Monday.

4. ‘He Would Have Eventually Killed Somebody’

He has been arrested at least eight times in New York City, including for assaulting a police officer and jumping over the counter at a KFC restaurant to assault an employee, according to the Post.

Baril has been dealing with mental health issues since he was young. A former neighbor, retired NYPD officer Fred Fata, told the New York Post that Baril was a “menace to society,” and said even though he feels bad he was shot, “I feel better that he’s off the street because he would have eventually killed somebody.”

Fata said Baril is bipolar and lived with his mother, who works for the Port Authority, until they were evicted about a year ago for not paying rent.

“He used to intimidate the woman in the building though he never assaulted anyone,” Fata told the Post. “The women in the building who were moving in were afraid of him just for the way he looked.”

Baril was “friendly and bright” while on his medication, but was despondent when off it, Fata said.

5. 8th Avenue Was Closed Between 36th and 38th Streets

Police created a crime scene stretching multiple blocks on 8th Avenue. A heavy police presence was in the area.

The hammer was recovered at the scene and crime scene investigators were examining it. 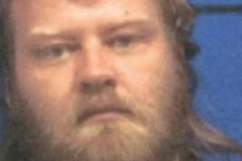