A mentally ill black man from Virginia died in a jail cell on August 19 after spending four months behind bars for stealing $5 worth of snacks. A local media report gave his name as Jamycheal Mitchell, 24, of Portsmouth, Virginia. He was nicknamed Weezy. Just a few hours after Mitchell was arrested, on April 22, William Chapman was shot dead by Virginia cops close-by.

Here’s what you need to know about Mitchell:

The Guardian report quotes Mitchell’s aunt, Roxanne Adams, saying that her nephew suffered from a bipolar disorder. She said that he had been refusing medication and meals during his time in jail. “His body failed. It is extraordinary. The person I saw deceased was not even the same person.” Adams is a registered nurse in Virginia. She also told The Guardian that Mitchell struggled to hold down work due to his various conditions. Adams says “He just chain-smoked and made people laugh. He never did anything serious, never harmed anybody.”

2. He Was Due to Be Sent to a Mental Health Hospital, But There Was No Bed for Him

In April 2015, Mitchell was accused of stealing a Mountain Dew bottle, a Snickers and a Zebra cake from a 7-Eleven store. He was arrested by an officer L Schaefer and faced charges of petty larceny and trespassing, both misdemeanors, reports the Guardian. He was first held at Portsmouth city jail for three weeks until he was transferred to the regional jail on May 11. On May 21, he stood before a judge who said that Mitchell was unfit for trial and ordered him to the Eastern State hospital, for mental health treatment. The Guardian quotes a court clerk saying that there was no bed at the hospital for Mitchell. On July 31, the judge in the case, Morton Whitlow, reiterated his order, there was no bed for Mitchell. So he remained at the jail. The Guardian reports that Mitchell had two previous convictions in 2010 and 2012 for petty larceny.

3. He Was an Altar Boy in His Youth

On August 21, WAVY in Virginia reported that a 24-year-old man died at the Hampton Roads Regional Jail in the town of Portsmouth. Mitchell isn’t named in that report but it states that a man was found unresponsive in his cell at around 5:45 a.m. The Guardian named the victim as Jamycheal Mitchell. In his obit, it states that Mitchell was a native of Thibodaux, Louisiana and that he went to high school in Baton Rouge. He was an altar boy at his local catholic church. His funeral was held in Portsmouth on August 25.

4. His Model Sister Paid Tribute to Mitchell Saying ‘God Needed You More Than We Did’

His model sister, Jasmine Adams, paid a heartbreaking tribute to her little brother on Facebook saying:

Our family and friends had to swallow the hardest pill we ever had to swallow in life! They took a good be away from us! If it’s one thing jamycheal made sure he did, he was gonna put a smile on your face….no matter what, he touched soooo many ppl & he didn’t even know it. It’s gonna take a long time for our hearts to heal and for us to accept it but we are taking it one day at a time cause we know that God gives his toughest battles to his strongest soldiers… Rest on Lil Brother (Jamycheal) I guess God needed you more than we did. But now we know you’re in a place where there is no more struggles and no more pain. Every time I look up I know your there and we know your ok and we couldn’t have asked for Anything more. You got your wings Jamycheal!

She also posted a link to a Go Fund Me page for Mitchell’s family. According to her Twitter page, Adams is a cover model who has graced the covers of “King Magazine,BlackMen,Jet Beauty,Ink Candy,Gorgeous Magazine!her Twitter page,

5. Charges Are Being Sought in the Shooting of William Chapman, Who Was Killed by Police on the Same Day that Mitchell Was Arrested

The news of Mitchell’s death come just two days after the Commonwealth of Virginia’s Attorney said that an indictment would sought in the shooting of William Chapman by police. That shooting occurred at a Walmart, approximately 2.5 miles from the 7-Eleven where Mitchell was arrested. WTKR reported that Chapman and an officer had a fight in the parking lot of the Walmart. It resulted in the 18-year-old being shot dead. 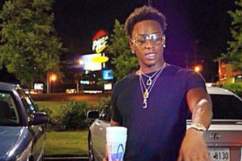 Loading more stories
wpDiscuz
6
0
Would love your thoughts, please comment.x
()
x
| Reply
A mentally ill black man from Virginia died in a jail cell on August 19 after spending four months behind bars for stealing $5 worth of snacks.