Forensic police search for evidences outside the La Belle Equipe cafe, rue de Charonne, at the site of an attack. (Getty)

The Paris terror attacks were carried out in a coordinated assault across the French city on Friday, November, 13, 2015. At least five locations were targeted by gunmen and suicide bombers. Paris Police told CNN the attacks occurred at the following locations:

A definite timeline of the attacks has not been established. The attacks are believed to have started at about 9:15 p.m. Paris time, with the suicide bombings outside the national soccer stadium where France was playing a friendly match against Germany. The game began at 9 p.m. In video of the match the first explosion is heard at the 16th minute of the game. A second explosion occurs about three minutes later, in the 19th minute.

Shootings were then reported at three locations in the 10th and 11 districts, near bars and restaurants. The exact time of those shootings isn’t known, but a witness told the Los Angeles Times she checked her phone after hearing gunfire and it was 9:39 p.m. Paris time.

Next, gunmen stormed the Bataclan theater at about 10:40 p.m. After a hostage situation, police stormed the building, freeing hostages 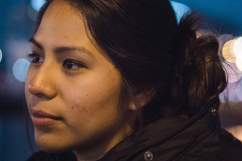 Here are the details of how many were killed at each location, along with information about each attack:

1. At Least 89 Were Killed in Shootings at the Bataclan Theater

The worst of the attacks occurred at the Bataclan theater, where multiple gunmen stormed the concert venue. The attack came as the American band Eagles of Death Metal were playing inside.

“Several armed men came into the concert. Two or three men, not wearing masks, came in with what looked like Kalashnikovs and fired blindly on the crowd,” Europe 1 journalist Julien Pierce told the BBC.

“It lasted between 10 and 15 minutes. It was extremely violent and there was panic. The attackers had enough time to reload at least three times. They were very young.”

Officials say at least 89 people were killed inside the theater. 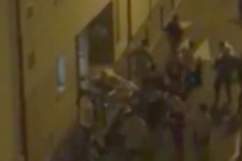 2. At Least 15 Were Killed at the Le Petit Cambodge Restaurant

A victim lies on the ground covered by a white sheet following an attack at rue Bichat. (Getty)

Gunmen opened fire outside Le Petit Cambodge, a Cambodian restaurant, killing at least 15. Officials say 10 other victims are being treated for life-threatening injuries.

“All of a sudden we heard huge gunshots and glass coming through the windows. We ducked with the other diners,” Charlotte Brehaut told CNN.

She said the shooting came from the street.

3. At Least 19 Died Outside the La Belle Equipe Bar

Another shooting occurred outside the La Belle Equipe bar in a popular area with many restaurants and bars.

The shooting again came from the street.

4. At Least 4 Were Killed on Avenue de la Republique

People run after hearing what is believed to be explosions or gun shots near Place de la Republique square. (Getty)

At least four victims were killed there.

5. At Least 4 Died in Suicide Bombings Outside the National Soccer Stadium

A police car is parked outside a fast food chain restaurant outside the Stade de France. (Getty)

Suicide bombers detonated outside the national soccer stadium just north of Paris, where the national team was playing a friendly game against Germany. The game continued after the explosions, but French President Hollande, who was in attendance, was escorted out of the stadium.

One civilian and three suicide bombers died in the area near the stadium, officials say.

Loading more stories
wpDiscuz
6
0
Would love your thoughts, please comment.x
()
x
| Reply
Police say terror attacks were carried out in a coordinated assault on at least five locations in Paris. More than 100 people were killed during the attacks.