In Serial season 2 episode 2, narrator Sarah Koenig mentions the release of Bowe Bergdahl’s Taliban hostage video once he arrives in Pakistan from Afghanistan. Watch it above.

According to the Serial episode, the Taliban conspired to take Bergdahl to western Pakistan because it would be harder for American forces to get Bergdahl back there, as Pakistan is a U.S.-ally and a sovereign nation. But because the Taliban knew that Americans assumed that the Taliban would head for Pakistan, they took a circuitous route through the Ghazni Province of Afghanistan.

A Taliban commander named Qari Ismail Sulaiman Zai took charge of Bergdahl while he was in the Ghazni Province and arranged to have him delivered to the Haqqani network in North Waziristan, Pakistan. The Terrorism Research & Analysis Consortium writes that the “Haqqani network, which has the backing of elements within the Pakistani security establishment, is one of Afghanistan’s most experienced and sophisticated insurgent organizations.”

Once he was in Pakistan, the above video was released.

To read a recap of ‘Serial’ season 2 episode 2, click here. 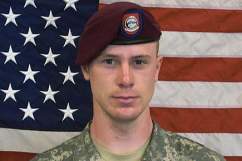