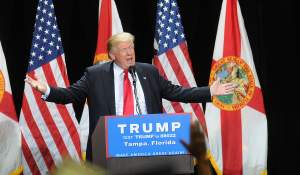 Presumptive GOP presidential nominee Donald Trump is calling for President Obama to step down. In a statement, released the afternoon after the Orlando shootings at Pulse Nightclub, Trump said in a statement:

“In his remarks today, President Obama disgracefully refused to even say the words ‘Radical Islam’. For that reason alone, he should step down. If Hillary Clinton, after this attack, still cannot say the two words ‘Radical Islam’ she should get out of this race for the Presidency,” Trump said in the statement.

Prior to the statement, Trump had been tweeting out similar thoughts.

Is President Obama going to finally mention the words radical Islamic terrorism? If he doesn't he should immediately resign in disgrace!

What has happened in Orlando is just the beginning. Our leadership is weak and ineffective. I called it and asked for the ban. Must be tough

Trump was quick to turn the conversation to politics after brief tweets about the victims. Here is a sampling of his other tweets:

"@WandaWalls20: @realDonaldTrump Please make us safe. We cannot have Hillary as president. We will be in so much trouble.

Trump will be giving a speech on Monday on the “terrorists attack, immigration and national security.”

Here is the full statement Trump released on his website:

Last night, our nation was attacked by a radical Islamic terrorist. It was the worst terrorist attack on our soil since 9/11, and the second of its kind in 6 months. My deepest sympathy and support goes out to the victims, the wounded, and their families.

If we do not get tough and smart real fast, we are not going to have a country anymore. Because our leaders are weak, I said this was going to happen – and it is only going to get worse. I am trying to save lives and prevent the next terrorist attack. We can’t afford to be politically correct anymore.

The terrorist, Omar Mir Saddique Mateen, is the son of an immigrant from Afghanistan who openly published his support for the Afghanistani Taliban and even tried to run for President of Afghanistan. According to Pew, 99% of people in Afghanistan support oppressive Sharia Law.

We admit more than 100,000 lifetime migrants from the Middle East each year. Since 9/11, hundreds of migrants and their children have been implicated in terrorism in the United States.

Hillary Clinton wants to dramatically increase admissions from the Middle East, bringing in many hundreds of thousands during a first term – and we will have no way to screen them, pay for them, or prevent the second generation from radicalizing.

Loading more stories
wpDiscuz
0
0
Would love your thoughts, please comment.x
()
x
| Reply
Donald Trump has called for President Barack Obama to step down from office after the Orlando shootings. Read his full statement and tweets here.