On CNN, commentators were calling it a historic moment; Thiel was met with applause and a standing ovation from those gathered. The reaction on social media was more mixed, with some criticizing Thiel for supporting a party they see as anti-gay. Some criticized his intensity on stage. Others praised the moment.

Worth $2.7 billion dollars, according to Forbes, mostly from investments in innovative companies like PayPal (which he helped found) and Facebook, Thiel came to the United States from Germany as a young child. 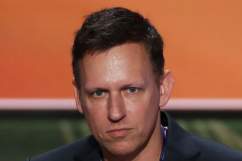 THE MOST ANTI GAY PLATFORM IN HISTORY – and yet Peter Thiel says "I am proud to be a Republican." He is crazy, on drugs, delusional or all

Peter Thiel calling out pseudo-cultural issues as if its his party not pushing those pseudo issues.

Peter Thiel is the 1st person to say that he's gay on an RNC stage. https://t.co/FBba0HcYhc pic.twitter.com/3JkUbDeJ1r

Wow Peter Thiel was super passionate about his message#RNCinCLE

Trump is suuuper lucky to have @peterthiel support

Read More
2016 Presidential Campaign, Donald Trump, PayPal, Republican National Convention
Follow Heavy ↓
The PayPal billionaire, Peter Thiel, had a historic moment on the RNC stage when he said he was proud to be gay. He received a standing ovation. See Twitter reaction.