McClary Bros. Drinking Vinegar entered the Shark Tank in Season 7 with its Colonial-era cocktail and soda mixers. We caught up with CEO Jess Sanchez McClary to learn about how the company has grown since the show.

Although she did not get a deal, the company has grown tremendously. “We experienced $200,000 plus in sales in the three months that followed our airing,” she explained.

A lot of their advice was ‘Just stay the course’ and ‘Keep doing what you’re doing.’ We’ve been doing that and expanding in a few directions. I understand why they didn’t make me an offer, but I’ve never held that against any of them. We still grew the business and we’re still heading in a great direction and I’m happy to have been able to introduce them to a delicious mixer.

We're very excited to announce the release of our newest flavor, Michigan Saskatoon. With hints of apple-ish blueberry, this flavor is beautiful and delicious and it makes HANDS DOWN the best Old Fashioned we've seen come through McClary Bros. Check out the recipe and get a bottle here: https://goo.gl/daltYG And if that wasn't enough…a portion of the proceeds of this limited-time flavor go to @foodlabdetroit to thank them for the support they've provided to us over the years and to help them further their efforts. Cheers to Foodlab! #drinkingvinegar #localfood #saskatoon #vinegar

We have introduced a few flavors. We launched two new lines of flavors: Forgotten Flavors and Community Grown Flavors. ‘Forgotten’ are flavors that are no longer as popular as they once were or have never became big commercial produce items. A portion of the proceeds of these flavors, goes to benefit a local nonprofit. To date we’ve done two: Michigan Pawpaw and Michigan Saskatoon. ‘Community Grown’ are flavors that were grown in urban farms, community gardens, school gardens, etc. For each bottle made, we donate $1 to the nonprofit that grew the ingredients. We just released the first two of those: Detroit Strawberry, from strawberries grown by Keep Growing Detroit Garden and Detroit Fig Leaf grown at Henry Ford High School Garden in Detroit.

Be ready when those orders start coming, but make time for the media interviews! Your local media will all want to talk to you and you need to make sure that’s managed and organized so you don’t miss any opportunities.

We are now in the process of developing some new ideas and processes. It’s a very exciting time for us and we’re anxious to put it all in action. I’m also making time to volunteer with a local nonprofit to teach and mentor early stage food business that are navigating the challenging landscape of food startup. 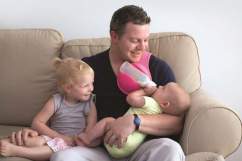 Beebo After ‘Shark Tank’- Thousands Sold Within Week of Airing