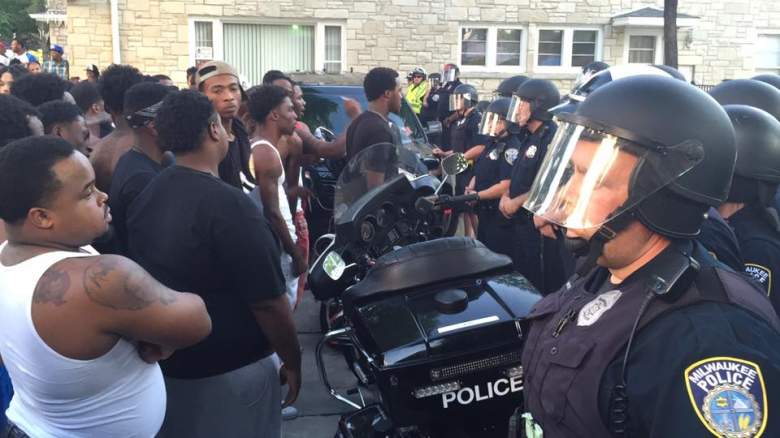 Violence erupted in Milwaukee, Wisconsin, on Saturday after a black man was fatally shot by police. Police vehicles and four businesses were set on fire, according to WISN.

The man shot by police has been identified by family members as 23-year-old Sylville Smith. The officer who shot him is described as a 24-year-old black man with six years of experience, according to Fox 6. He has been placed on administrative leave.

One police officer is in the hospital after a brick was thrown through his squad car in the unrest that followed the shooting.

Rioters can be heard chanting “black power” in a video at the scene of one of the riots.

Heavy spoke with a man, Tory Lowe, who was at the scene after the riots began. “This is after years of abuse by the police from 2011 until now. It has built up for so long, and now people are acting on it,” he said.

The chaos began Saturday night in the hours after a Milwaukee police officer shot and killed an armed suspect, according to the Milwaukee Journal Sentinel.

The 23-year-old man killed in the shooting was fleeing from a traffic stop while armed with a stolen gun when he was shot by an officer about 3:30 p.m. in the city’s North Side. Milwaukee Police say.

The officer has been identified only as a 24-year-old male assigned to the department’s District 7. He has been an officer for three years and has worked for the department for six years. He was not injured and has been placed on administrative duty.

The shooting is being investigated by the Wisconsin Department of Justice’s Division of Criminal Investigation. Results of that probe will be turned over for a review by the Milwaukee County District Attorney’s Office.

The suspect’s sister posted to Facebook before the riots ensued:

Milwaukee Police Capt. Mark Stanmeyer said the man killed by police had a “lengthy arrest record,” but didn’t report any details of the past crimes. Investigators said the man’s gun came from a burglary in the neighboring town of Waukesha. The owner of the gun said 500 rounds of ammunition were also stolen.

“He was a nice good person, he was really respected. That’s why everyone came out. They’re angry,” YetNefataria Gordon told the Journal Sentinel.

This is embarrassing. #Milwaukee pic.twitter.com/It1wkX7eTZ

Police spotted a suspicious vehicle and they stopped the vehicle. As they stopped the vehicle, two individuals fled from the vehicle. One started heading west, another started heading east. A Milwaukee police officer with six years experience started chasing the individual who was running to the east. He ordered that individual to drop his gun. The individual did not drop his gun, held the gun, or I don’t know that for a fact, but had the gun with him. The officer shot several times. The individual was shot in the chest and once in the arm…that individual who is a 23-year-old man has died. The officer was wearing a body-camera. It is my understanding that the body camera was operating.

Barrett said he was at the scene after the shooting occurred, and that it was peaceful when he left earlier in evening.

“That officer had to make a split-second decision when the person confronted him with a handgun,” Milwaukee Police Assistant Chief Bill Jessup stated. “This is a risk they take every day on behalf of our community.”

A second suspect who fled on foot was apprehended and is in custody, Jessup said. 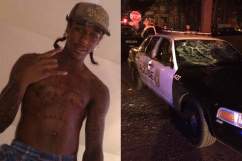 Police cars, a gas station, bank and a vehicle supply store were set on fire by alleged rioters, according to WTMJ.

#Milwaukee I don't get it. Just yesterday we were killing our own people, 5 shootings but ig Black lives matter only when officers shot us.

Assistant Police Chief James Harpole said there were three people who were in the gas station when it was set ablaze, and all were able to safely escape.

As the chaos unfolded, officers got into their cars trying to leave when people in the crowd started smashing the windows of their squad cars.

Officers in riot gear moved cautiously into an intersection of the chaos later in the night, and told a crowd to disperse. Rioters reportedly threw rocks at police as they held up their shields, according to CBS.

Bus shelters were torn from the ground littering the street with shattered glass.

A bus shelter ended up in the street… #Milwaukee pic.twitter.com/fhWmN7y3Dx

Just had rocks thrown at me photographing this burn car at Sherman Blvd near Auer. Police now retreating. Me too! pic.twitter.com/d5CNyHAQGs

Crowds chased reporters and a photographer from the Milwaukee Journal Sentinel, punching one reporter to the ground, the newspaper reported.

3. A Community Activist Said ‘This Has Been a Long Time Coming’ 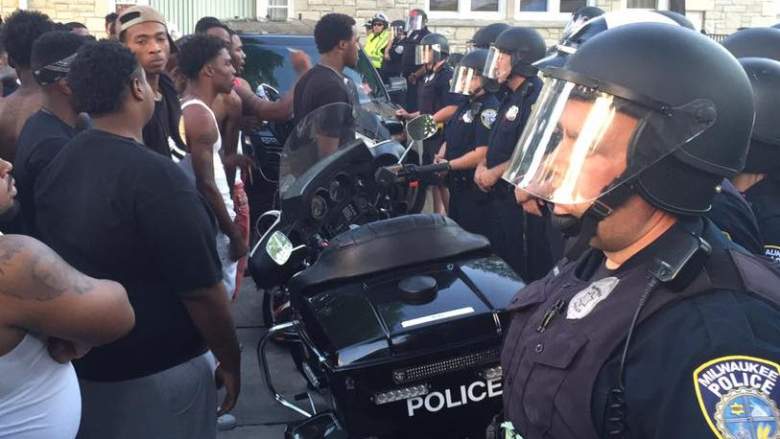 Heavy spoke with Tory Lowe, who lives in Milwaukee and was at the scene of the riots. Lowe said he is called a “community activist” among his peers. He stated:

I got there after the young man was killed. He had got shot in the back a couple times and he was running from the police. They called me and said I better get down there because people were pissed off…because the police just killed somebody.

Lowe said though the man killed had a weapon on him, people who called him to the scene said the suspect wasn’t “confronting” police with it. This contradicts a statement by Milwaukee Police Assistant Chief Bill Jessup, who said the “officer had to make a split-second decision when the person confronted him with a handgun.”

When asked if he condoned the violence, Lowe stated:

He said citizens of Milwaukee are fighting for justice for these men, who were all killed by police or “failed by the system in Milwaukee.”

The tides of public opinion now turning against Black Lives Matter after Milwaukee riots as evidenced on Twitter #b… pic.twitter.com/Yhk01iG2uL

Lowe believes there were 200 people or more at the riots, and said word traveled fast to meet up after the police-involved shooting. He also said there is a huge problem with incarcerated black men in this particular area of the city. “53206 locks up more black men then any other zip code in the country,” he stated.

In the video above taken from the scene, people can be heard chanting “black power.” Many are taking to social media to ridicule the riots in Milwaukee since it happened after an armed man was shot by police, and all of the circumstances aren’t known yet.

“Milwaukee is yet another example of why the Black Lives Matter Movement cannot be taken seriously,” Kenny Tobin tweeted.

5. 5 Men Were Previously Killed in Milwaukee in Less Than 24 Hours

Five men were killed in Milwaukee between Friday night and early Saturday, Fox 6 Milwaukee reported. The incidents are still being investigated but are not officer related.

The medical examiner reported that the victims killed were all men.

Ok 5 killed in 9 hour span in Milwaukee how many riots 4 it or hashtags or even anyone mention their names? https://t.co/FLFO7bCMGt

Two of the deaths happened near a tavern that is known to be a “trouble spot,” and city leaders are looking further into this, according to Fox 6 Milwaukee.

Police tweeted at 2:20 a.m. Sunday that police were restoring order and reducing deployments. 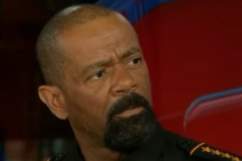 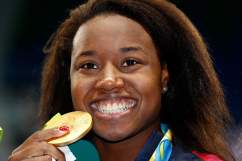 Loading more stories
wpDiscuz
169
0
Would love your thoughts, please comment.x
()
x
| Reply
Riots have erupted in Milwaukee after a police-involved shooting. Heavy spoke with a man who was at the scene, and says he understands why it happened. Read more here about this breaking story here.