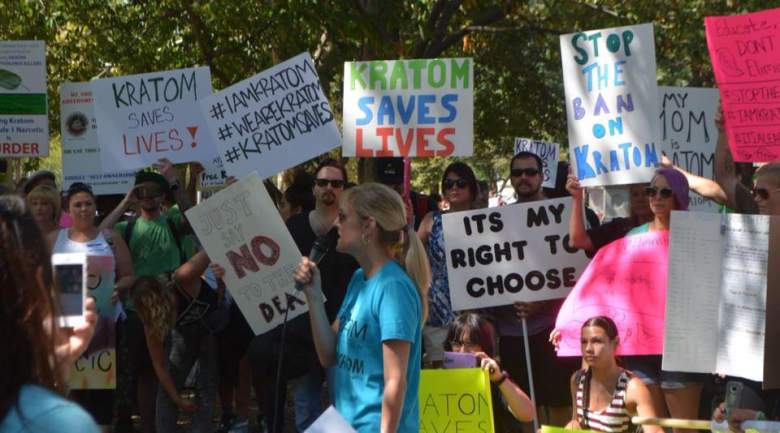 The Drug Enforcement Agency (DEA) confirmed to Heavy that a ban on kratom will not go into effect as of September 30. Russ Baer, a spokesperson for the DEA, stated on September 29:

What I can tell you is…we’re not going to do it tomorrow. I don’t have a date as to when we are going to do that final order publication in the federal registry.

Susan Ash, director and founder of the American Kratom Association, said kratom advocates will finally be heard. On September 30 she stated:

The DEA will be releasing a statement in the next few days about opening a public comment period and exactly what that will look like…this is a really big deal…regardless of what happens it means our voices have been heard!

The announcement came August 31 that the DEA planned to ban kratom in the United States as of September 30, causing panic and outrage to the thousands who use the leaves, which are closely related in makeup to the coffee plant. They’re specifically looking to outlaw the compounds mitragynine and 7-hydroxymitragynine found in in the herb.

Users of the plant argue that it is no more addictive addictive than caffeine, and say it has helped them with such things as pain, anxiety and overcoming addiction to dangerous pharmaceutical drugs.

According to Dale Jerue of the United Kratom Association, “Found primarily in South East Asia, kratom is a relative to the coffee tree. The pain relief effects found in kratom are produced by alkaloids found in the leaves. Historically, because of its reported analgesic and energizing effects kratom was used for centuries by farmers and tribes people in the region.”

Heavy caught up with the DEA to find out if the ban is moving forward.

Here’s what we found out:

The Plan to Ban Kratom Is Still in Place 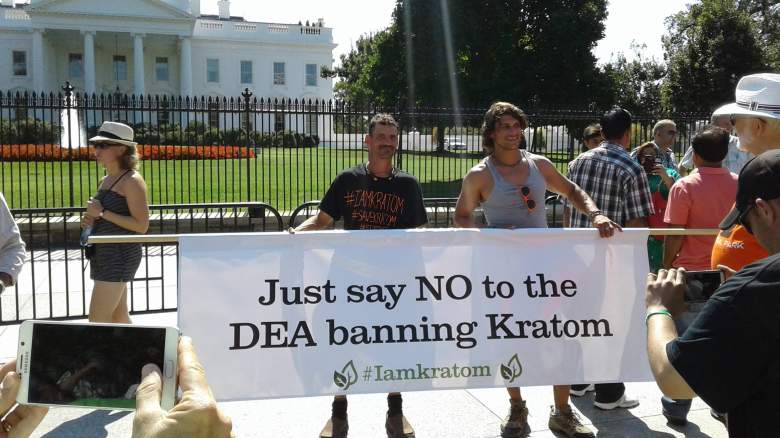 Protesters of the ban are seen at the White House on September 13. (Photo courtesy of Ricky Bell)

When asked on September 28 if the ban will still go through, Baer stated:

We are moving forward in terms of scheduling. We don’t know if it’s going to be on that date or sometime thereafter. The reason September 30 came into play was…we’re required by law to post in the federal register our intent to schedule at least 30 days prior to the actual temporary scheduling action. If you do the math, the earliest possible date we could do the temporary scheduling action is September 30.

He also said they’re waiting for direction from the DEA’s Office of Diversion Control.

However, Baer confirmed to Heavy on September 29 that the ban will not go into effect on September 30, and said he is unaware of a date at this time.

“We have determined that it represents an imminent hazard, so we’re not going to drag our feet very long,” Baer told U.S. News. “It’s not a matter of if, it’s just a matter of when.”

Heavy also spoke with Ash, who has been adamantly working with different governmental entities trying to get the DEA to reconsider the ban. And she has the support of many.

A “Dear Colleague” letter has been signed by a bipartisan group of 51 U.S. representatives, which equates to more than 10% of congress, asking the Obama administration to reconsider the DEA’s plan.

DEA’s Federal Register notice posted on August 31, 2016 proposes placing kratom in the most restrictive category-Schedule I-within 30 days. This significant regulatory action was done without any opportunity for public comment from researchers, consumers, and other stakeholders. This hasty decision could have serious effects on consumer access and choice of an internationally recognized herbal supplement.

A legal letter was also submitted to the DEA, however, Ash has not received any feedback regarding responses at this time. “To my knowledge there has been no formal response to any of the letters,” she said.

Baer told Heavy on September 29 that the DEA will be responding to the letters, but is unaware of an exact date.

Ash is still working hard, and told Heavy that today she’s trying to circulate a senate letter drafted by Sen. Orrin Hatch, one of the longest serving senators in the United States, that is also asking the DEA to postpone scheduling “until a public comment period can be put into place, and until they can justify why the need for emergency scheduling in this case.”

Ash went on to say:

We’re in a bit of a holding pattern because we’re hoping out of respect that they will respond to congress and to our attorneys prior to making anything final, and that they will be receiving the letter from the senate as well. And we hope the DEA will seriously consider the issues brought up in the legal, congressional and senate letters.

To put this all into perspective, let’s take a look at what kratom is being compared to. If the ban goes into effect, the plant will be in the same category (Schedule I) as drugs such as heroin, LSD and ecstasy.

Also on the DEA’s plan is to make a synthetic drug called U-47700 a Schedule I substance.

The drug can be purchased online and is connected to at least 50 deaths nationwide, the Associated Press reported.

In stark contrast, Kratom alone has never been linked to any deaths.

A Reddit user who goes by the name “Electronic Exorcist” described the effects of U-47700:

The only opiates I have used apart from u-47700 are heroin and oxycodone (IV and nasal). I would put the high somewhere between those.
With about 6mg u-47700 up the nose, then another 6 about an hour later, I am nodding happily. Not much of the ‘uplift’ that oxy has. I get real chill and happy. No matter how bad my day was, it is much better after a few sprays.

In comparison, Dan H. told Heavy how kratom, which is usually used in tea form, makes him feel. “I personally compare it to the best cup of coffee I’ve ever had,” he said. “I don’t feel high, foggy, out of it. I feel ready to take the world on. No pain, less anxiety. I just feel…OK.”

His statement goes along with what several other kratom supporters have said.

Nick Wing, a journalist with the Huffington Post, decided to give the herb a try for himself during a protest at the White House. He stated:

About 20 minutes after finishing the drink, I started to notice some of the commonly reported effects. I felt a familiar feeling, like a caffeine buzz ― that buoyant, airy feeling I used to get years ago, when a double shot of espresso actually affected me. My heart rate felt slightly elevated, though I didn’t take my pulse to measure a change.

I also felt sweatier than normal, though it was hard to tell if that was due to the kratom or from having been out in the heat for the previous hour and a half.

The kratom also produced some mild gastrointestinal effects, a few awkward burps here and there, which left me bordering on nausea for a few minutes.

And that was it. A few hours later, I was completely back to normal.

Skeptics of the DEA’s proposed ban say the reason for the government’s involvement is because pharmaceutical companies don’t make anything off of a natural and healing plant, which is in direct competition of their bottom-line.

It’s hard to imagine even one congressman trying so hard to stop the DEA’s ban on U-47700, and for obvious reasons. Yet dozens of lawmakers are absolutely adamant about helping the kratom community…support that Ash believes will only keep growing as knowledge and letters keep circulating.

What You Can Do

Kratom supporters are urged to contact state senators to sign the “Dear Colleague” letter, which can be downloaded here.

Vendors and fellow kratom advocates…I cannot stress how important it is to call your senators today. They are all receiving this letter today and need to sign. Be nice to whomever you talk to and explain how long you have taken kratom and for what reason.

You can find your senator here.

An example of what to say can be found on gll-getalife.com:

A very important letter crossed Senator ______’s desk this morning.
It calls for the DEA to delay their intent to classify Kratom, a natural herb, as a schedule I controlled substance so more research can be done.
I am a responsible adult that has uses Kratom for [all the reasons]…

The site highlights that it’s important to make the call on September 29, and to follow-up on signatures September 30.

We really showed up last week for Pocan/Salmon.
Promise that you'll go hard this week too.
We CAN win if we finish strong.
Leave nothing.

The video above also explains instructions and what you can do at this point to help stop the ban.

Read more about the proposed ban below: 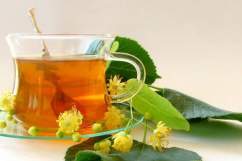 Kratom News: What the DEA’s Ban Lift Means, What’s Next & What You Can Do

You can read the stories of kratom supporters here:

Loading more stories
wpDiscuz
89
0
Would love your thoughts, please comment.x
()
x
| Reply
The DEA's plan to ban kratom will not go into effect as of September 30, a DEA spokesperson told Heavy on Thursday. Read more for the latest kratom news and updates.