Julian Assange, the controversial founder of WikiLeaks, wants to attend the funeral of his close friend and mentor, journalist Gavin MacFadyen. The London-based, American-born investigative reporter died last weekend in London at the age of 76. But the Swedish government turned down Assange’s request to go to the funeral.

What happened? Here’s what you need to know.

1. Assange is Holed up in the Ecuador Embassy in London, Due to a Rape Charge

Julian Assange, inside the embassy of Ecuador in London. (Getty)

In 2012, Assange was granted political asylum by the left-wing government of Ecuador, after the WikiLeaks founder jumped bail rather than face rape charges against him.

The rape accusation stemmed from a visit to Sweden in 2010 during which two women reported that Assange had sexually molested them. He originally turned himself in to authorities and fought the allegations, which he denies. But after two years and Sweden’s refusal to drop the charges, he applied for asylum from Ecuador and took refuge in the Latin American country’s London embassy, where he has remained ever since.

2. MacFadyen was an Early Supporter of WikiLeaks

After Assange, now 45 and a former teenage computer hacker from Australia — who was convicted of 25 hacking-related charges at age 20 — founded WikiLeaks in 2006 and soon published online a massive trove of secret United States documents from the wars in Iraq and Afghanistan, MacFadyen offered his support and became a member of WikiLeaks’ board of directors.

Assange and MacFadyen became close friends, with Assange even moving into MacFadyen’s London townhouse in 2010.

Swedish prosecutor Marianne Ny, who is pressing the rape charges against Assange. (Getty)

In order to attend MacFadyen’s funeral which will presumably be held in London, Assange petitioned Swedish prosecutor Marianne Ny to lift the warrant against him on the rape charge on “compassionate” grounds so that he could go to the late journalist’s funeral.

But the Swedish prosecutors turned him down flat.

“Julian Assange has requested that the Swedish prosecutor should grant him leave from the detention order and the European arrest warrant in order to go to a funeral,” the prosecutors said in a statement, before denying the request saying that such a suspension of an arrest warrant would violate Swedish law. 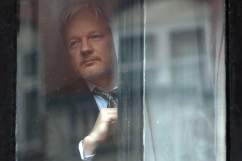 4. Assange was Outraged and Vowed to Appeal

In a statement posted Thursday the WikiLeaks Twitter account, Assange slammed the prosecutor, Ny, as “corrupt,” “wicked,” and “callous.” WikiLeaks has said that it will appeal Ny’s denial of the Assange request to Sweden’s highest court.

5. Assange Fears Assassination if he Leaves the Embassy

Assange has said he fears that he will be killed by someone similar to Jack Ruby (above), the man who killed accused assassin Lee Harvey Oswald in 1963. (Getty)

Assange said in the Twitter statement Thursday that he would use a police escort to travel to and from the MacFadyen funeral. He has earlier claimed that he would be assassinated in he set foot outside the Ecuadorian embassy in London.

Last year in an interview, Assange claimed that, “there have been bomb threats and assassination threats from various people,” made against him and even expressed fear that he would be the target of a drone strike — though he admitted the latter possibility was remote.

“I’m a white guy,” Assange said in August of 2015. “Unless I convert to Islam it’s not that likely that I’ll be droned, but we have seen things creeping towards that.”

He has also said that if he were extradited to the United States on espionage charges, he would be murdered “Jack Ruby-style,” a reference to the nightclub owner who gunned down Lee Harvey Oswald — the accused assassin of President John F. Kennedy — in a crowded Dallas police station in 1963.

Loading more stories
wpDiscuz
1
0
Would love your thoughts, please comment.x
()
x
| Reply
Wikileaks founder Julian Assange will not be allowed to attend the funeral of his mentor Gavin MacFadyen. But why not?