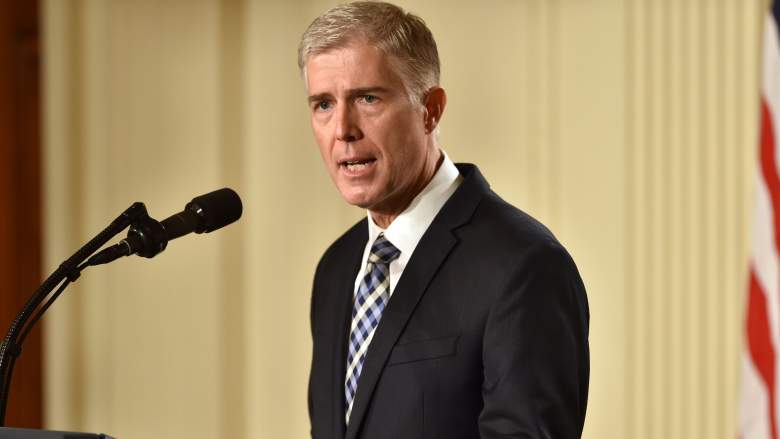 The Democratic National Committee was quick to respond to President Donald Trump‘s nomination of Neil Gorsuch as Supreme Court Justice to replace the late Antonin Scalia’s vacant seat. Senate Minority Leader Chuck Schumer also issued a statement, insisting that the Senate must keep the 60-vote threshold to approve the nomination of Gorsuch.

Gorsuch currently serves as a judge on the U.S. court of Appeals for the Tenth Circuit and was appointed by President George W. Bush. He is 49 years old and was born in Denver.

In its statement, the DNC said the nomination of Gorsuch “raises some very serious questions about whether he would be a Supreme Court Justice who believes the Constitution protects all of us, not the just the wealthy, and whether he can approach each case with an open mind to make fair decisions based on merits.”

In his statement, Schumer also noted that Gorsuch has a history of siding with corporations over individuals, although he has “serious doubts about Judge Gorsuch’s ability to meet” the standard of earning 60 votes in the Senate.

“The Senate must insist upon 60-votes for any Supreme Court nominee, a bar that was met by each of President Obama’s nominees. The burden is on Judge Neil Gorsuch to prove himself to be within the legal mainstream, and in this new era, willing to vigorously defend the Constitution from abuses of the Executive branch and protect the constitutionally enshrined rights of all Americans,” Schumer wrote. 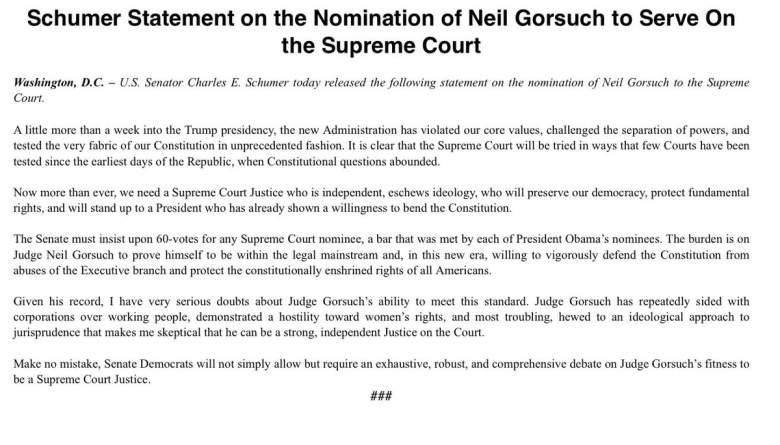 Senator Patrick Leahy, the ranking Democrat on the Senate Judiciary Committee accused President Trump of outsourcing the nomination process to “far-right interest groups.” Leahy added, “President Trump said he would appint justices who would overturn 40 years of jurisprudence established in Roe v. Wade. Judge Gorsuch as shown a willingness to limit women’s access to health care that suggests the President is making good on that promise.”

Senator Jeff Merkley of Oregon accused Republicans of trying to “pack” the Court in his statement:

“The most fundamental thing that must be understood about tonight’s announcement is that this is a stolen seat. This is the first time in American history that one party has blockaded a nominee for almost a year in order to deliver a seat to a President of their own party. If this tactic is rewarded rather than resisted, it will set a dangerous new precedent in American governance.
“This strategy of packing the court, if successful, could threaten fundamental rights in America, including workers’ right to organize, women’s reproductive rights, and the rights of ordinary citizens to have their voices heard in elections rather than being drowned out by the corrupting influence of dark money from the richest Americans.
“If President Trump were serious about healing the divisions in America and undoing the damage wrought by Senate Republicans last year, he could have named Merrick Garland to fill this seat. Garland is a centrist jurist who is respected on both sides of the aisle. Instead, he doubled down on division by picking an ideological and extreme nominee to satisfy the far right.
“This is a stolen seat being filled by an illegitimate and extreme nominee, and I will do everything in my power to stand up against this assault on the Court.”

Judge Gorsuch must explain his hostility to women's rights, support of corporations over workers and opposition to campaign finance reform.

President Trump had the chance to select a consensus nominee to the Supreme Court. To the surprise of absolutely nobody, he failed that test.
Instead, he carried out his public promise to select a nominee from a list drawn up by far right activist groups that were financed by big business interests.
Judge Neil Gorsuch has been on this list for four months. His public record, which I have reviewed in detail, paints a clear picture.
Before even joining the bench, he advocated to make it easier for public companies to defraud investors. As a judge, he has twisted himself into a pretzel to make sure the rules favor giant companies over workers and individual Americans. He has sided with employers who deny wages, improperly fire workers, or retaliate against whistleblowers for misconduct. He has ruled against workers in all manner of discrimination cases. And he has demonstrated hostility toward women’s access to basic health care.
For years, powerful interests have executed a full-scale assault on the integrity of our federal judiciary, trying to turn the Supreme Court into one more rigged game that works only for the rich and the powerful. They spent millions to keep this seat open, and Judge Gorsuch is their reward.
Every day, our new President finds more ways to demonstrate his hostility for our independent judiciary, our civil society, and the rule of law. Now more than ever, America needs Supreme Court justices with a proven record of standing up for the rights of all Americans – civil rights, women’s rights, LGBT rights, and all other protections guaranteed by our laws. We don’t need another justice who spends his time looking out for those with money and influence.
Based on the long and well-established record of Judge Gorsuch, I will oppose his nomination.

Both Sonia Sotomayor and Elena Kagan were appointed to the Supreme court with over 60 votes from the Senate. The last judge to make it to the Court without 60 votes was Samuel Alito, who received just 58 votes.