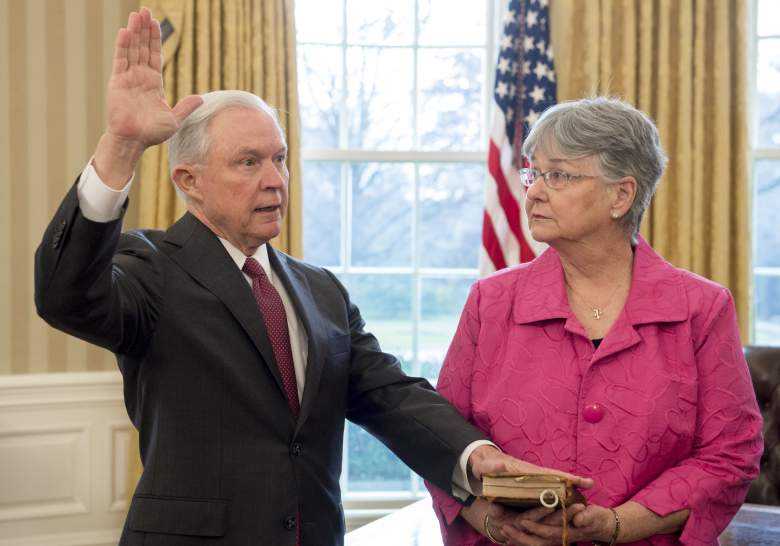 Jeff Sessions, alongside his wife Mary, is sworn in as Attorney General in the Oval Office of the White House in Washington, DC, February 9, 2017. (Getty)

Mary Blackshear Sessions, the wife of U.S. Attorney General Jeff Sessions, is a former teacher who met Sessions during college in Alabama and has been married to him for decades.

Attorney General Sessions served as a U.S. senator from Alabama from 1997 to 2017. Before that, he was U.S. attorney for the Southern District of Alabama and then attorney general of Alabama. Sessions has been repeatedly under the microscope due to the investigation into Russian interference in the 2016 election, and his wife has appeared at his side when he faced tough questioning in Congress, sometimes giving him a supportive embrace for the cameras.

On November 14, 2017, Jeff Sessions faced “lawmakers on Capitol Hill in a new round of questioning which is sure to revolve around his knowledge of Russian contacts made by the Trump campaign,” reported CBS News. The testimony also came after Jeff Sessions “suggested a second special counsel was needed in order to look into Clinton Foundation dealings and an Obama-era uranium deal.” Jeff Sessions’ wife, who was sitting right behind him, appeared emotional at the hearing, causing a buzz on Twitter.

Jeff Sessions wife appears to be holding back tears as she sits behind her husband during his testimony.

Sessions will be 71-years-old in December 2017, and he has been married to Mary Blackshear Sessions for nearly 50 years. Here’s what you need to know about the wife of Jeff Sessions:

1. They Met at Huntingdon College in Alabama 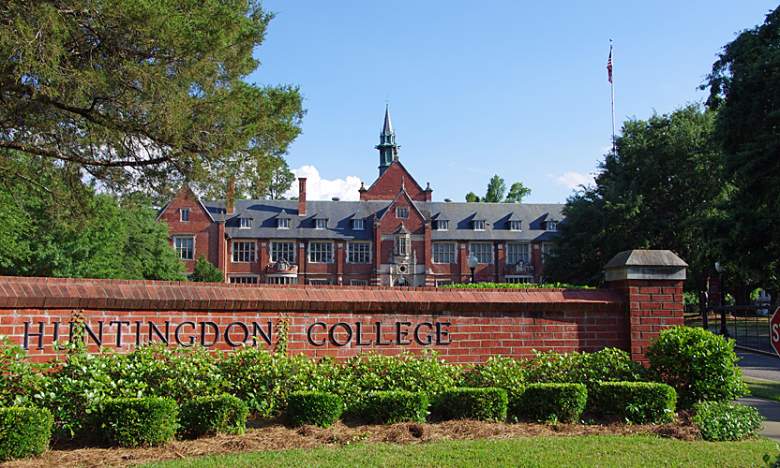 Mary Sessions was also inducted into Sigma Sigma Sigma, a women’s sorority. She evidently is quite proud of the fact that she is a graduate of Huntingdon. “A Huntingdon enthusiast, Sessions frequently refers prospective students to Huntingdon and always makes Huntingdon visitors to our nation’s capitol feel welcome,” Huntingdon College’s website states.

In June 2017, when Jeff Sessions testified before the Senate Intelligence Committee, the cameras caught he and his wife in a poignant embrace. “Before Sessions swore his oath, his wife of 48 years embraced him. Mary Sessions sat just behind her husband in the hearing room as the attorney general endured more than two hours of pointed questions,” reported The Los Angeles Times. Sessions said he was blessed by his family’s support, the newspaper reported.

Mary Sessions was at her husband’s side again on November 14. 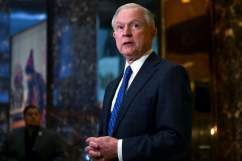 2. Mary Sessions Has Worked as a Teacher in Tuscaloosa, Reform, and Montgomery 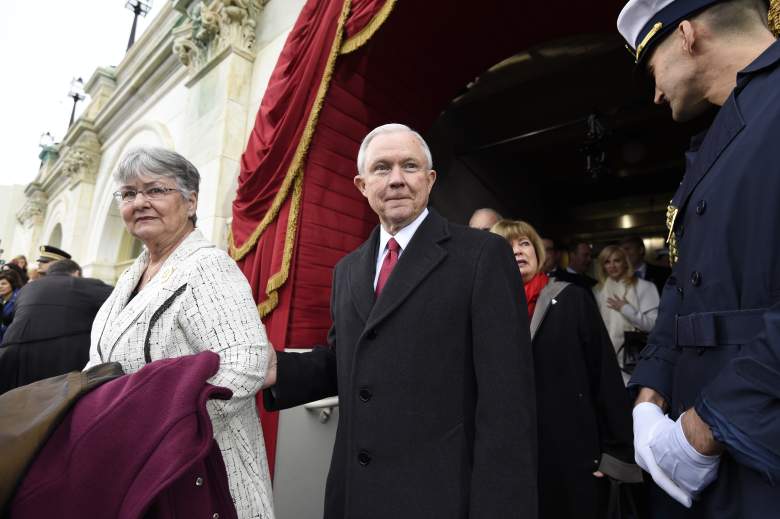 Jeff Sessions and his wife Mary Blackshear Sessions arrive for the Presidential Inauguration of Donald Trump at the U.S. Capitol on January 20, 2017 in Washington, DC. (Getty)

Mary Blackshear Sessions has a background in teaching, and she taught in Tuscaloosa, Reform, and Montgomery schools while her husband was pursuing his law degree, according to Huntingdon College. Jeff Sessions received his law degree from the University of Alabama School of Law, graduating in 1973.

Mary raised the couple’s three children and supported her husband behind the scenes as he moved into the world of politics in the 1990s. According to US News and World Report, “Jefferson Beauregard ‘Jeff’ Sessions III was born on Dec. 24, 1946, and grew up in Hybart, Alabama, as the son of a country store owner.” Jeff Sessions was an Eagle Scout growing up who “was inspired in high school by the National Review magazine, which helped him to ‘appreciate the United States and to develop a political philosophy that respected hard work, faith, and country,'” the magazine reported.

Mary Sessions continues to teach to this day, now teaching Sunday school at the Ashland Place United Methodist Church, according to Newsweek. This church is located on Wisteria Ave in Mobile, Alabama.

Jeff Sessions himself also serves as a lay teacher and Sunday school teacher at the church, or at least he did when he was a U.S. senator, according to Faulkner University. Jeff Sessions and his wife were married in 1969.

4. She & Jeff Have Three Children & 10 Grandchildren 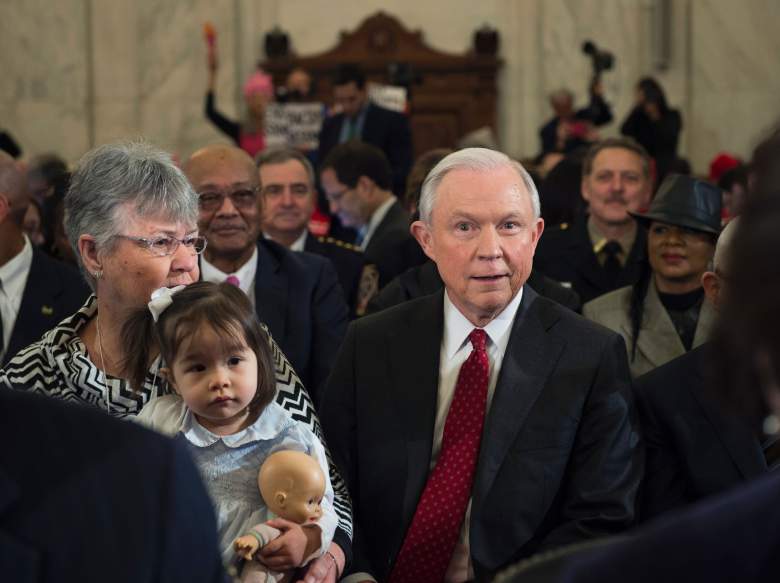 Jeff Sessions sits next to his wife Mary and their granddaughtr prior to the Senate Judiciary Committee hearings on Sessions’ nomination to be Attorney General on January 10, 2017 in Washington, DC. (Getty)

During Jeff Sessions’ confirmation hearing in January, his granddaughter was in attendance. She is of Asian descent, the daughter of Ruth Sessions Walk and John Walk, and an MTV host received criticism for suggesting that Jeff Sessions was using the child to prove he wasn’t racist. Speaking of Sessions’ confirmation hearing, there was an amusing moment in the hearing involving his wife. Senator John Cornyn asked Sessions if he ever agrees with his wife. Sessions at first said no before realizing he was under oath. “Wait a minute, I’m under oath,” Sessions said. “In occasion we do. Yes.”

The Sessions’ daughter, Ruth, wrote a letter defending her father. It read, “I am so honored to be my father’s daughter. His accomplishments and job titles aside, I am just so proud of his extreme graciousness towards those that intended him harm. They were relentless and ruthless, and Dad complained not. They spewed lies and hate, and Dad simply shrugged it off. They chose to attack him when he was not there to set the record straight. Yet, still, in his last chance to dish it right back at them, my Daddy simply wished his colleagues well and asked them to find hope (and progress) through reconciliation with those of the opposite view point. I obviously still have a lot to learn from my Dad.”

Daughter Mary Abigail Reinhardt is married to Cmdr. Paul Reinhardt. In 2014, he was “named the new commander of the Blue crew of the Ohio-class ballistic submarine, the USS Alabama,” according to AL.com. Sam Sessions, Jeff and Mary’s son, is a member of the Greek Orthodox Church through marriage. He and his wife have four children.

5. She Is Active in CHERUBS, a Charity Supporting Families of Children Born With Congenital Diaphragmatic Hernia (CDH)

Mary Blackshear Sessions is active in the non-profit organization CHERUBS, also known as the Association of Congenital Diaphragmatic Hernia Research, Awareness and Support, according to Huntingdon College. This charity is dedicated to supporting the families of children born with congenital diaphragmatic hernia. Sometimes referred to as CDH, this is a birth defect of the diaphragm that can prevent proper lung development and that is often fatal.

In addition, Sessions is a member of the Advisory Committee of Congressional Families Cancer Prevention, a network of spouses of government employees dedicated to promoting the advancement of cancer research. The executive director is Lisa Murray McGovern, wife of Massachusetts Senator Jim McGovern.

Read More
Donald Trump, Politics
Mary Blackshear Sessions is the wife of Attorney General Jeff Sessions. Here's what you need to know about her.