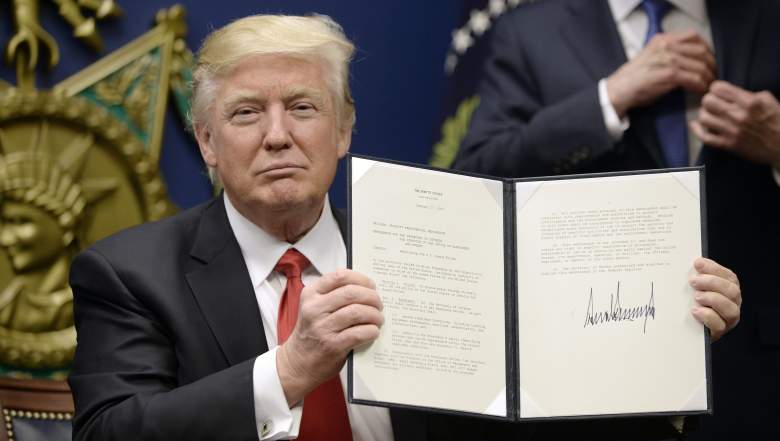 In a statement released on Sunday afternoon, Trump says that his executive order is not a “Muslim ban” and that there are many Muslim-majority countries that were not on the list of countries named in the order. This comes hours after Rudy Giuliani, current White House cyber security adviser, said on Fox News that Trump asked him during the campaign to come up with a legal way of implementing a “Muslim ban.”

Trump in his statement today also attacks the media two separate times, saying that they know that he will keep America free and safe but they refuse to say so.

President Trump goes on to say that his executive order is no different than when President Obama banned visas for refugees from Iraq for six months. A major difference between those two things is that Trump’s executive order also affects green card holders.

Nowhere in the statement does Trump make mention of the decision of a New York federal judge on Saturday to block the deportation of many individuals who had been stranded in U.S. airports as a result of the executive order. He also does not specifically mention any of the protests currently occurring throughout the United States, though the statement is clearly a reaction to the backlash the administration has received this weekend.

Here is the full statement released by the White House on Sunday afternoon:

“America is a proud nation of immigrants and we will continue to show compassion to those fleeing oppression, but we will do so while protecting our own citizens and border. America has always been the land of the free and home of the brave. We will keep it free and keep it safe, as the media knows, but refuses to say. My policy is similar to what President Obama did in 2011 when he banned visas for refugees from Iraq for six months. The seven countries named in the Executive Order are the same countries previously identified by the Obama administration as sources of terror. To be clear, this is not a Muslim ban, as the media is falsely reporting. This is not about religion – this is about terror and keeping our country safe. There are over 40 different countries worldwide that are majority Muslim that are not affected by this order. We will again be issuing visas to all countries once we are sure we have reviewed and implemented the most secure policies over the next 90 days. I have tremendous feeling for the people involved in this horrific humanitarian crisis in Syria. My first priority will always be to protect and serve our country, but as President I will find ways to help all those who are suffering.”

Moments after this statement was released, Trump responded on Twitter to a statement from Lindsey Graham and John McCain; both senators said that Trump’s executive order was not properly vetted and that it “may do more to help terrorist recruitment than improve our security.” Trump tweeted that Graham and McCain are both “sadly weak on immigration.” He also accused them of wanting to start World War III.

The joint statement of former presidential candidates John McCain & Lindsey Graham is wrong – they are sadly weak on immigration. The two…

…Senators should focus their energies on ISIS, illegal immigration and border security instead of always looking to start World War III.