Tom Perez was elected the new chairman of the Democratic National Committee after winning the vote at the organization’s winter meeting February 25.

The threshold for winning the first vote was 214.5 votes, and Perez was just one vote shy of achieving that exact mark in the first round. He garnered 213.5 votes to Ellison’s 200, resulting in a second ballot.

In his victory speech, Perez said he is appointing Ellison the deputy chair of the DNC.

Perez previously served as the United States Secretary of Labor (2013-2017) under President Barack Obama. He has also spent time as the Assistant Attorney General for the Civil Rights Division of the U.S. Department of Justice.

Before the vote took place in Atlanta, Perez told DNC members that the party has been faced with a “crisis of confidence” and a “crisis of relevance” recently. He added that going toe-to-toe with President Donald Trump shouldn’t be the only initiative, rather it’s important to share the DNC’s message.

Perez was born in Buffalo, New York and received a bachelor’s degree from Brown University and then a JD from Harvard Law School.

During the 2016 presidential election, Perez’s name was thrown around as a potential running mate for HIllary Clinton, though she later selected Tim Kaine for the role. He had announced his intention to run for the vacant chairman job for the DNC on December 15, 2016, and has campaigned on the platform of saying the party needed “to go to the suburbs and rural America and talk to people.

The election for the new DNC chair was held following the resignation of former DNC Chairwoman Debbie Wasserman Schultz, who left the post following the 2016 DNC email leak by WikiLeaks. It was revealed in the email leak that Wasserman Schultz showed bias against Bernie Sanders’ presidential campaign. She was succeeded as DNC chair by Donna Brazile, who served in an interim role, but ran into controversy as well.

Emails leaked by WikiLeaks revealed that Brazile had informed the Clinton campaign of debate questions ahead of time. 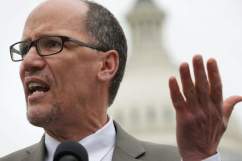