In the video, Taylor states that he is a member of the appropriations committee that funds the Department of Homeland Security. He then refers to a new report by the FBI that states that 30% of current domestic terrorism investigations by the bureau are of refugees. After stating, “It’s important not to label all refugees bad people, that’s not why I’m here,” Taylor’s feed is then lost.

However, CNN has been the subject of recent scrutiny regarding cutting off people that disagree with their news narrative. Last month, CNN cut off Bernie Sanders after he called CNN “fake news” on-air.

The announcement of when the new ban would be implemented was made by White House counselor to President Donald Trump, Kellyanne Conway, yesterday morning on Fox & Friends. One of the major points of contention surrounding the previous ban was that it was implemented immediately, causing chaos at airports in the United States and around the world.

Trump’s new order also rectifies a major point of concern from the previous ban. In the new ban, anyone that has already been issued a green card or visa is not affected by the ban. It just applies to new green card and visa seekers. Conway told Fox & Friends, “If you have travel docs, if you actually have a visa, if you are a legal permanent resident, you are not covered under this particular executive action… Also, Iraq is no longer on the list based on their enhanced screening and reporting measures.” 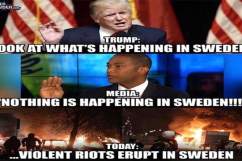