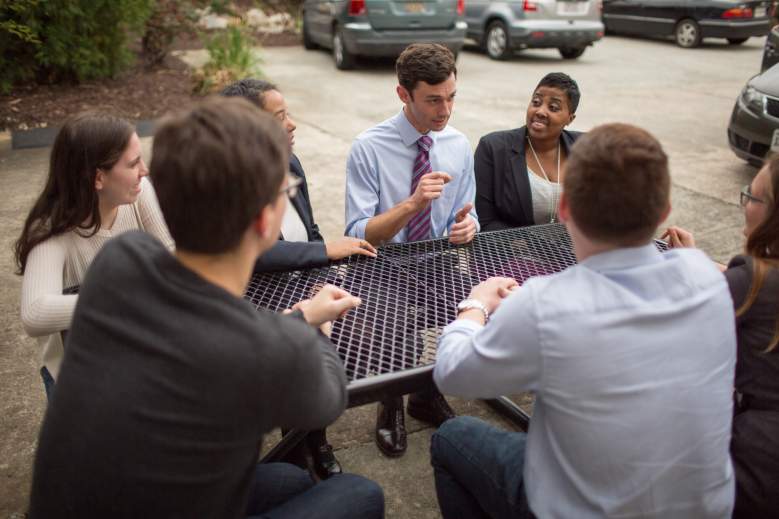 Jon Ossoff sits down to talk to voters. (Daniel Schwartz/Jon Ossoff for Congress)

The open seat in the U.S. House of Representatives was left vacant when Price was confirmed as the secretary of the Department of Health and Human Services.

The survey ran from March 15-16 and found that Ossoff, a first-time candidate with a business and national security background, has built on his lead in the race in comparison of a poll that was released in February. In that poll, Ossoff received 32 percent of support while Handel was at 25 percent and Gray was third with 11 percent.

The special election takes place April 18 and is seen by many as a referendum on President Donald Trump and his policies. The election seems primed to head toward a runoff that would occur June 20. The only way for a runoff not to happen is if a candidate receives over 50 percent of votes, which seems highly unlikely given the number of candidates.

Notably, the last time the district voted a Democrat to the seat was 1965 (Jon J. Flynt Jr.). Before Price, the seat was held by Republicans Newt Gingrich and Sen. Johnny Isakson.

The new poll surveyed 625 respondents and included those that consider themselves “very likely” to vote in the special election. To see the full report from the poll, read below.

Fritz Wenzel, a pollster from Clout Research, surmised to zpolitics that Ossoff likely was able to build such a lead on the rest of the field with less than one month to go because of both attack ads that have been hitting the airwaves within the district and the unprecedented backing of Democrats.

Ossoff’s support from Democrats in CD-6 is at a very high level, and it is extraordinarily strong. Democrats appear to be flocking to support him in backlash to these attacks, but in a runoff election, they are very likely to drive Republican and Independent voters away from Ossoff. He will likely be hard-pressed to make gains against what is expected to be a massive Republican and conservative onslaught to save this seat for the Republican Party.

The congressional race has received a lot of attention nationally from donor groups. They have funded both parties in the race and rolled out attack ads. A Washington D.C.-based super PAC said it’s spent $1.1 million on the race on ads that focus on Ossoff in particular.

Handel’s campaign released its first ad of the campaign March 16, which was also focused on Ossoff and his experience, calling him “Nancy Pelosi’s hand-picked candidate.”

Ossoff’s campaign released an ad of its own that spoke about his background in investigative journalism. He is the CEO and managing director of Insight TWI, an investigative film company.

Republican political consultant Chip Lake said to zpolitics that polling suggests that the GOP should be “warned” that it must unify after the special election.

In many respects this confirms what most in the GOP have been saying for a while, which is that we shouldn’t take this race for granted. Republicans have math working against us, here. We have a lot of strong candidates, and Democrats have one. So right now they’re united and we’re scattered. I still believe that an extended runoff will happen, and it will benefit the Republican. Maybe more important than ever, Republicans are going to have to unite the day after this jungle primary, and that will be hard because there are so many candidates. I’m confident that we will, but it’s going to take some work.