The Wisconsin man accused of shooting four people to death in a domestic abuse rage has been identified as Nengmy Vang, according to multiple media reports.

The suspect – accused of slaying a veteran police officer in the spree – was named as Vang, 45, by The Green Bay Press Gazette and HBC Hmong Broadcasting Company in Minnesota. Court records show he was involved in an active divorce case in which his wife was represented by one of the victims, lawyer Sara Quirt Sann (pictured below).

The state Department of Justice identified the victims in a news release on March 23, and said the 45-year-old suspect was recovering in the hospital from non-fatal injuries. He is from the Town of Weston.

On April 1, it was announced that Nengmy Vang had died. He was shot by police during the incident, according to The Associated Press.

On March 31, Vang’s brother Vajloogzeb Vaj told WSAU-TV that Vang is unconscious and in declining health and doctors were “giving him a 50 percent chance of living.” The DOJ has said little about the case since it occurred.

According to the DOJ, the victims were Officer Jason Weiland, bank employees Dianne Look and Karen Barclay, and Quirt Sann. A photo of Barclay will be added to this story when one is obtained.

DOJ says the motive was domestic violence, although Vang’s wife – the mother of his six children – was not physically harmed.

1. Quirt Sann Was Representing Vang’s Estranged Wife in a Contested Divorce Case & Vang Was Allowed to Keep His Guns

Wisconsin Circuit Court Access shows that Nengmy Vang was the petitioner in the divorce.

The records show the Vangs had a final pre-trial scheduled for April 28, 2017 and a contested divorce hearing scheduled for June 8. In October, court records show, a guardian ad litem was appointed in the high conflict divorce. The records say that Quirt Sann (known as Sara Quirt in court) had submitted a cover letter along with the petition for the GAL. Genetic testing was requested by Nengmy Vang’s lawyer early on in the case, according to the court records.

In September, Nengmy Vang complied with a parenting program. Mediation was attempted at Quirt Sann’s request, but an “impasse” was reached, the court records say. The Wausau Daily Herald reports that the Vangs were married for two decades.

According to The Wausau Daily Herald, a judge allowed the children to stay in the family’s house while Vang moved to an apartment and “Vang was allowed to take with him various personal items, including four guns.”

The newspaper said the Vangs had “at least six children, two of whom are minors.” Vang’s brother told The Associated Press that “Vang had become short-tempered and hit their mother in a fit of rage a few months ago.” According to the AP, the brother said he was horrified by the crimes, and said Vang was a squirrel and deer hunter. Vang was born in Laos and came to the U.S. in 1988, the brother told AP.

Quirt Sann was a life-long resident of Wausau, Wisconsin, according to DOJ. She graduated in 1999 from Valparaiso Law School, according to the Wisconsin State Bar.

Robyn J. De Vos, president of the Marathon County Bar Association said in a statement, “Our Marathon County legal community is shaken to its core by this senseless act of violence that killed our dear friend and colleague. Sara was a smart, compassionate attorney who exuded a quiet confidence and, as a guardian ad litem, strove to understand the real struggles families face. She was a kind, beautiful person. We will never be the same.”

Sara’s husband, Scott, the manager at a country club, wrote a lengthy post on Facebook that said she fought for “those who needed representation.”

I would like to thank all of you that have reached out in this difficult time. I cannot express the gratitude for the many kind words. Yesterday we lost a wife, a daughter, a sister, a stepmom, an aunt, a friend and a community servant. I have never been a fan of social media, however Sara was fully engaged. I feel obligated to reach out to the many friends she had. Had it not been her, she would’ve been sending kind regards to any one of you.

To fully respect Sara’s death it is important to know a few things. She was an avid watcher of the news. A majority of Sara’s family and I ask you to be the bigger people in this situation. They say ‘The Devil is in the details’. Do not get caught up in colors and politics. This person could’ve been any gender, any color, any religion and they could’ve acted in other ways of violence to make their point. Don’t get trapped in the details.

I am asking you to read Ephesians 6 versus 10-20. I spoke with Sara about this passage years ago. She had to put her armor on every day and fight for those who needed representation. She often had to make a ‘no win’ decision daily for the children that she represented. She would often question her decisions with me. She would often share her sorrow of not being appreciated by either party. Make no doubt in your mind that she was a warrior. She wore her armor and fought hard many days thanklessly. Please appreciate her like I do. She was indeed a hero. I love Marvel stories of super powers and maybe that’s why I loved her.

I am asking all of you to put on your armor tonight and in the following days. There is no doubt that evil is present every day and right in front of us. We can choose to give into hate and anger by listening to the details. Please remove any anger driven posts. Post something that you loved about her. Post a picture that I may have never seen. I have access only to view your posts on her iPad. Your encouragement is giving me faith. Know that my armor is polished and on to do battle in the name of righteousness. Come together with me a community and find healing and strength together.

Sara and I did a lot of fun things together. We lived life fully. We could’ve lived more. I am thankful for the time I had. Continue to keep us in your prayers.

Some members of the Hmong community writing on social media expressed concern that the shootings would lead people to blame the ethnic group, but others pointed to the husband’s comments as hope that would not occur.

2. Court Records Show Vang Worked at a Cheese Company & Was Having Financial Problems

Wausau, Wis., police: Officer and at least two others shot in a shooting spree in three locations https://t.co/f1hrFvlLeG pic.twitter.com/GTf87tlwRV

Court records do not show any past criminal record for Nengmy Vang in Wisconsin, but he does have some small claims cases.

In December, his wages were garnished from a local cheese company after a bank filed a small claims action against him for $5,789, court records say. A warrant was authorized and then cancelled in the case.

The cheese company describes itself on its website as “a national leader in natural cheese packaging.”

A credit union also took Vang and his wife to small claims court in 2016 for $9,370. In 2010, another bank sued Vang in small claims court for $4,308, a judgment he paid in full. His wages were also garnished in that case – from a Wisconsin hotdog restaurant.

There were two other past small claims actions against him. Both said his wages were garnished from a sports shoe store.

3. The Horrific Shooting Spree Started in a Bank & Vang’s Wife Fled to a Nearby Subway Restaurant

According to the DOJ, at about 1:30 p.m. on March 22, authorities “received a report of an active shooter in Rothschild, Wisconsin.”

Scanner traffic shows that a woman was at a Subway restaurant “claiming her husband’s trying to kill her and her husband’s at the bank.” You can listen to the dispatch audio above. 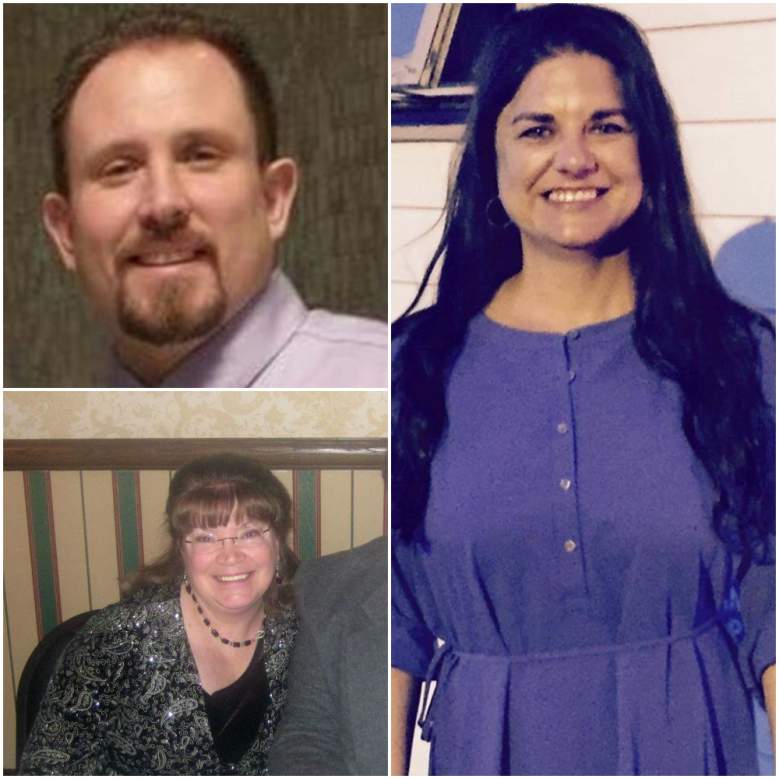 Several moments later, it’s reported that an officer is down. Scanner traffic shows that one of the shots was fired “from a rifle at a substantial distance.” According to the Wausau Daily Herald, “Weiland, the slain police officer, was shot as he was establishing a perimeter during the standoff.”

“The suspect visited the Marathon Savings Bank, killing two civilians, and a law office in Schofield, killing one civilian. The suspect ended this violent spree by barricading himself in an apartment in Weston, Wisconsin. After a few hours of negotiation, the suspect exchanged gun fire with responding officers and was injured,” said the DOJ release.

The suspect “was motivated by a domestic incident, not a bank robbery,” said DOJ.

4. Officer Weiland Was a Veteran Officer Devoted to the Green Bay Packers & Respected in the Community

According to DOJ, Weiland “spent 18 years in law enforcement, all of them in the Wausau-area, the last 15 with the Everest Metropolitan Police Department. Detective Weiland was well-trained and his brave response likely prevented other deaths.”

DOJ says the officer “is survived by his wife and two children. Jason, a devoted Green Bay Packers fan, was 40-years-old.”

Weiland’s LinkedIn page says that he was a detective with the Everest Metropolitan Police Department for the past five years. Before that, he served as a Patrolman/Field Training Officer/Patrol Corporal/Detective. He was a member of the Marathon County Sheriff’s Department working narcotics for more than two years. He also previously worked as a funeral home assistant. He was a 1998 graduate of North Central Technical College.

5. Look Was a Bank Branch Manager Who Had Just Celebrated Her 25th Wedding Anniversary & Barclay Was a Grandmother Called ‘Mum Mum’

Look “grew up in many places, but she called Wisconsin home,” said DOJ.

“A graduate of DC Everest High School, Dianne was the loving mother to two children, Christy Bleu and Chuck Mientke,” the release said. “Dianne will be remembered as a loyal employee of Marathon Savings Bank, where she has been a branch manager since 1998. Dianne valued the customer relationship and loved to serve her customers and neighbors.”

Look and her husband, Robert Look, met while she was working at a local bank in 1988, said the DOJ.

“The two married in 1992 and lived in South Dakota for a number of years before returning to Wisconsin in 1998. They have resided in Wisconsin since. Dianne and Robert celebrated their 25th wedding anniversary this past Valentine’s Day. Dianne was 67-years-old,” said DOJ.

The other bank employee killed, Karen Barclay, was described as a mother and grandmother.

“Barclay moved to Wisconsin in 1993 and was employed at Marathon Savings Bank for more than five years. She was a loving mother to one daughter and two granddaughters, ages four and seven,” said DOJ.

According to the Justice press release, Barclay “will always be remembered as ‘mum mum’ by her granddaughters. Karen was extremely dedicated to her work. She loved her holidays, co-workers, and spending time with family. Karen was 62-years-old.”