Ken Jennings is taking some heat today after taking aim at President Donald Trump’s 11-year-old son, Barron. According to the Daily Mail, Jennings took to Twitter to post about the First Son shortly after the President of the United States tweeted that his youngest was very upset after seeing the now-infamous Kathy Griffin photo.

President Trump wasn’t too thrilled to see that comedian Kathy Griffin had used “art” as an excuse for what many have called a tasteless photo in which she is seen holding up a severed head covered in blood, meant to resemble that of the President’s. A short while after the photo was posted, Griffin issued an apology and deleted the photo.

“I sincerely apologize. I am just now seeing the reaction of these images, I’m a comic, I crossed the line… I went way too far. The image is too disturbing, I understand how it offends people, it wasn’t funny I get it, I made a lot of mistakes in my career, I will continue, I asked your forgiveness,” Griffin said by way of a video apology.

Jennings, who is known for holding the longest winning streak on Jeopardy, posted the following tweet after reading that the President’s youngest son was hurt after seeing the disturbing image.

Barron Trump saw a very long necktie on a heap of expired deli meat in a dumpster. He thought it was his dad & his little heart is breaking

As you can see, this tweet received a lot of attention from other Twitter users. Another Trump sibling, Donald Trump Jr., decided to go to bat for his little brother, calling out Jennings with the following tweet.

It takes a real man to pick on an 11 year old. Yet another low from the left, but they will rationalize this away with their usual excuses. https://t.co/JDF3VsVEJ1

A short while later, Trump Jr. responded to a tweet about Jennings’ book deal with Simon and Schuster. Another Twitter user said, “He writes children’s books for Simon & Schuster. Call them at 1(800) 223-2336, then [choose] option 4. Yes, this is the jackass from Jeopardy.”

Donald Trump Jr.’s reply is below.

Good point, you would think that in this day & age @simonandschuster would have an issue with one of their children's authors bullying a kid https://t.co/S4Bxs7AnSs

Meanwhile, Jennings has refused to apologize for a tweet that many are calling insensitive. He has, however, responded to at least one other Twitter user who called him out for mocking a child.

The “amazing” tweet that Jennings is referring to is below.

TMZ reports: Barron Trump was watching TV & saw @kathygriffin holding the severed head. He thought it was his dad. My heart is broken. 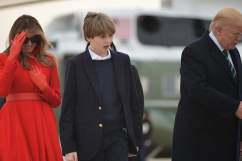