A 27-year-old middle school teacher’s aide has been accused of the rape and sodomy of a student who was under the age of 16. Lindsey Banta Jarvis was arrested in Fayette County, Kentucky, on June 16. Jarvis had been a teacher’s aide at Veterans Park Elementary in Lexington. Two days prior to her arrest, Jarvis had been indicted on one count of third degree rape, one county of sodomy in the third degree and one count of unlawful transaction with a minor. Jarvis has resigned her position at Veterans Park.

1. Investigators Say that the Victim’s Cell Phone Confirms Jarvis Was in a Relationship With the Teen

WKYT reports that victim’s cell phone was recovered as part of the investigation. That phone revealed information that led cops to conclude that Jarvis was in a relationship with the teen. The specific abuse occurred on May 2016 when Jarvis allegedly sodomized the victim and in June 2016 when she allegedly had sex with him.

At that time, Jarvis was a social studies teacher at Woodford County Middle School. WKYT says Jarvis performed that role between August 2013 until June 2016. In August 2016, Jarvis went to work at Veterans Park Elementary School. Jarvis job title was paraeducator.

Speaking to the Lexington Herald-Leader, Detective Steve Sparkman of the Versailles Police Department, the lead agency in the case, said that he has been looking into Jarvis since the beginning of 2017. Det. Sparkman said “… investigations take a while. There are so many dots you have to connect before you can bring charges against a person.”

2. Jarvis’ Husband Accompanied Her to Court Where She Pleaded Not Guilty

Jarvis on her way to court with her husband, Andrew. (Screengrab via WKYT)

Jarvis’ attorney entered a plea of not guilty on her behalf, reports WKYT. The station says that Jarvis was accompanied by her husband, Andrew to court. Jarvis had been listed in the arrest report as being married. According to the couple’s The Knot page, they were married in Lexington on December 28, 2013.

Judge T. Bruce Bell warned Jarvis to keep away from her alleged victim while she is out on bail.

3. Her Husband Is Deeply Religious & Has Been Described as ‘a Little Sanctimonious’

Jarvis’ husband, Andrew, is shown to be both religious and devoted to his wife according to posts on his Twitter and Instagram pages. Andrew writes in his Twitter bio, “Love God. Love People.” Although one person wrote that Andrew Jarvis is “pretty sexy even though a little sanctimonious.”

On his LinkedIn page, Andrew Jarvis says he works as a band director for the Fayette County Public School district. In May 2010, Andrew was “a recipient of the McCracken Performance Scholarship for exceptional achievement in the Winds, Percussion and Jazz Division” at the University of Kentucky.

In May 2015, Jarvis paid a touching tribute to his wife on Instagram:

4. Police Have Not Said What School Jarvis’ Victim Attended

The identity of the victim is unknown. Authorities are not saying what school he attended in order to further protect his identity. The victim is the same person in all counts, reports WKYT.

While we cannot comment on individual personnel issues, we can assure families and community members that we are aware of the matter. Our personnel protocols in a case like this would call for placing an employee on administrative leave pending resolution.

Though Detective Sparkman told the Lexington Herald-Leader that the allegations against Jarvis “came to light after she left [Woodford County].” 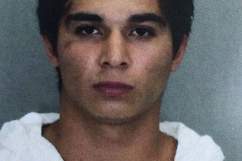 Loading more stories
wpDiscuz
46
0
Would love your thoughts, please comment.x
()
x
| Reply
A 27-year-old middle school teacher's aide has been accused of the rape and sodomy of a student who was under the age of 16.