David Eve was an airline passenger on a flight from London Heathrow to Miami when he caught two people joining the “mile high club” on film. The video has since gone viral and has been viewed well over 6-million times, even prompting Virgin Atlantic to share it on their Facebook page and confirm it was one of their flights.

“We’re pretty sure that’s our plane! The mood lighting certainly put a smile on their faces. #smilehighclub,” Virgin Atlantic wrote.

The flight occurred on July 4.

The couple in question has not been identified. However, according to the Daily Mail, the couple is American.

Inflight sex is not against the rules on Virgin flights. According to Business Insider, “Richard Branson, head of Virgin Atlantic, has pledged that his employees are not the type to ‘bang on lavatory doors when a couple slips in there.’ The airline even installed double beds with privacy screens in some aircraft, for a ‘more intimate flight.'” 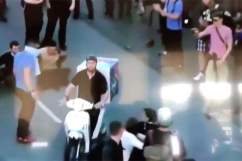