Facebook Ezzie Johnson, left, and Haleigh "Alexis" Hudson, were charged in connection with the video.

Two teens are facing charges after a disturbing video showing a woman who police say was kidnapped, beaten and sexually assaulted was streamed Tuesday night on Facebook Live in Gulfport, Mississippi.

Haleigh “Alexis” Hudson, 19, and Ezzie Johnson, 17, were both charged with felony kidnapping. Johnson is being charged as an adult and was held Wednesday on $200,000 bail. Hudson, who turned herself in Wednesday and is being held on $400,000 bail at the county jail, is also facing a felony sexual battery charge.

A third suspect, Kadari Booker, 17, was arrested later Wednesday on felony kidnapping and sexual battery charges. He was being held on $500,000 bail.

Gulfport Police said at a press conference that more arrests and charges could be brought as the investigation is ongoing.

The graphic video was deleted by Johnson, who police say recorded it and streamed the footage on his Facebook page, but a copy of the video was uploaded online by a woman who was watching the live video.

In one part of the video, a woman, identified as Alexis Hudson, can be seen standing over the victim while she sits on the couch. The victim is asked if she is ready to fight, and Hudson then begins striking her, before dragging her off the couch

You can watch that part of the disturbing video below:

You can watch the full 15-minute video below. The video was recorded by Tiffany Hailey on her cell phone as it played live on another cell phone.

“The vicim herself asked me to record this and post it due to the fact that she had no evidence against them. (Besides this deleted video) and the police told her they couldn’t do anything because they were intoxicated,” Hailey wrote on Facebook .”(They didn’t enough facts on scene) I DO very much appreciate whichever police officer did call her back in for a full, more (thorough) interview. I still stand by my original post! If this wouldn’t have gotten so much attention i don’t know if anything would have been proven or even been able to be done about it! I only relayed the message the victim asked me to, for JUSTICE!”

Heavy has removed the video from the beginning of the video, which shows nudity:

The man recording the video then begins talking to the camera about how his friend is “getting his d*ck sucked,” while laughing with others about it. The victim then appears to lock herself in the bathroom and a woman tries to get her to open the door.

“Y’all stay tuned, they’re gonna fight,” the man says into the camera. The victim then leaves the bathroom as the others in the apartment start making fun of her, with references to oral sex, asking if she wants more. A woman who is in the room, not Hudson, can be heard at one point telling the others to leave the victim alone.

The man filming the video says at one point, “70 viewers, we live!”

He then invites those watching to come to the house for oral sex, and asks how the victim how much she would charge it. “She’ll do it for the $10,” a woman, believed to be Hudson says, adding, “if she do it in my house she got to split it down the middle.”

At one point, the man recording the video says that they need more action so they can get more viewers, again asking the victim to perform oral sex for those watching. He then asks the victim if she wants to go home, and she says yes.

“She ain’t going home,” a woman says. “She knows what the business is. She’s going to suck some d*ck til her throat swell up.”

Police said they believe alcohol was involved in the incident. While the victim’s friends say she has special needs, police said they have not yet confirmed that.

Gulfport Police said the video was originally posted to Ezzie Johnson’s Facebook page. “Johnson is actually the one who memorialized these criminal acts by videotaping and distributing on Facebook live,” Chief Leonard Papania said at a press conference.

“Once again we are witnessing the dark side of social media,” he said at the press conference. “These warrants demonstrate our belief about these three individuals and their criminal acts, however, I can’t help but be disturbed by the incredible number of shares and views of this crude and despicable event. Not too long ago, we were up to 1,100 shares of that video and I think we’re around 48,000 views. It speaks loudly about our culture.”

Police said the investigation is ongoing and more arrests are expected. Additional charges could also be brought against Johnson and Hudson.

“We are also evaluating the actions of other people present in order to determine if other charges will be forthcoming and I can tell you with certainty there will be,” Chief Leonard Papania said at a press conference.

Papania said he applauds the members of the community who have given them information so far, including people with direct knowledge.

“Our phones have rang off the hook,” he said. “Not people being voyeurs, but people trying to help us in this criminal investigation, and we’re going to be moving forward as that information continues to unfold.”

You can read more about Alexis Hudson, Kadari Booker and Ezzie Williams at the link below: 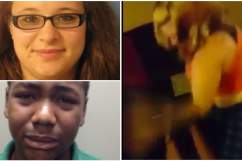